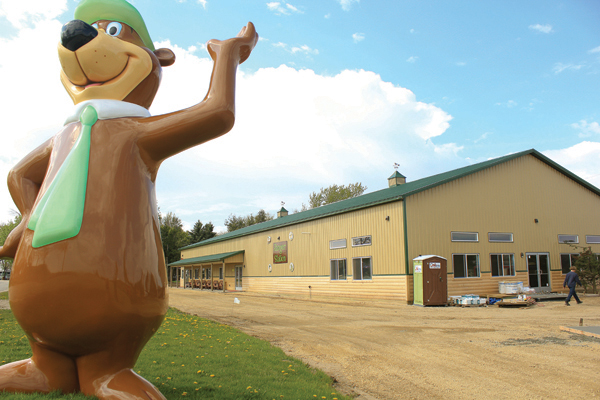 It’s still not easy for Tammy Westrich to walk through the brand-new buildings that sit in the same spot where she has made countless memories.

“It’s hard for me to walk over there,” said Westrich, who operates Yogi Bear’s Jellystone Park campgrounds with her husband and parents, 10 miles east of Austin.

Smoke still rises from the ruined structure of the main building at Yogi Bear’s Jellystone Park Camp and Resort in October 2011 after fire destroyed it in the early hours. -- Eric Johnson/Albert Lea Tribune

The family was devastated when its longtime, iconic lodge burned to the ground on early Sunday, Oct. 11, 2011. But instead of wallowing, the family set forth on rebuilding its dreams. Just six months later, they’ve done exactly that.

“There was no question we would rebuild,” Westrich said. “Of course, we didn’t know how, or when or why.”

Though that was the initial reaction, Westrich knows why the family rebuilt. It’s their way of life, especially for those, like her children, who haven’t experienced anything different.

“They don’t know any other way of life,” she said. “And at that age, that is their livelihood.”

Though builders, plumbers and electricians were still scurrying around the property Tuesday, Jellystone has come back to life. The new Ranger Station is nearly complete. A bathroom facility, complete with 11 showers and a row of washers and dryers is receiving final touches, and an indoor/outdoor event center sits right where the former storefront/lodge used to be.

According to Westrich, Tolney is a dreamer, and his vision has helped rebuild Jellystone.

“Don, he is really a dreamer,” Westrich said. “He is really good when it comes to thinking things out to a design. If he can dream it, we’ll build it.”

Among Don’s ideas and Westrich’s education as a certified park owner/operator, the family has expanded many of Jellystone’s offerings and added others. The new lodge is more spacious, houses a bigger kitchen, restaurant and arcade.

“The arcade has been my little heart and soul because I just wanted to make a statement,” Westrich said, and added details about the arcade’s neon lighting and reflective surfaces.

Furthermore, the new lodge, better known as the Ranger Station, now has a banquet hall for events and an adult room with cable and Wi-Fi.

Westrich said the kitchen will offer pick-up orders to non-campers and a buffet on the weekends, too.

Though work will be ongoing at the campground throughout the summer, Jellystone already opened, and all the new facilities should be usable in about a week. Westrich is excited, as many new faces are popping up at the campground, and the revamped Jellystone will have nearly 40 employees, too. Westrich hopes to draw more visitors by offering summer-long day passes, as well.

Westrich delightfully refers to all the campers and those within the Jellystone community as “family.”