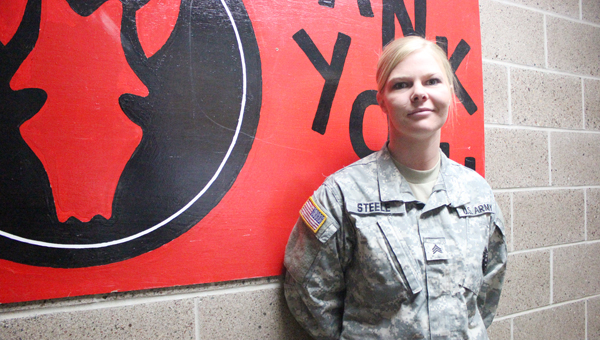 Sgt. Amber Steele poses for a photo at the Albert Lea Armory. Steele is in a recruiting and retention position with the Minnesota Army National Guard. -- Kelli Lageson/Albert Lea Tribune

A Twin Lakes woman has decided to devote her life to the Minnesota Army National Guard and currently is helping to find recruits who might want to do the same.

Sgt. Amber Steele, 28, grew up in Albert Lea and said being in the Army runs in the family, since her dad, Kevin Clapper, is also full-time with the Army.

“Growing up our parents told us about how being in the service is good,” Steele said.

She joined in 2006 after needing “a life-changing event.” She was first with a unit out of Cottage Grove for four years. She was also working toward a nursing degree and later working full-time as a nurse outside the Army. She used that medical knowledge in the Army as well, even though there were only three units in the state accepting female medics.

She has been working at the Albert Lea Armory since June in a new position in recruiting and retention. It was a complete turnaround for careers, as she’s had no experience selling before.

“I’ve never really been in sales, and that’s really what this is,” Steele said.

She’s loving her position, even though at first there was intense training, including a five-week course in Arkansas. She likes being able to talk to high school juniors and seniors about their future.

“Many of them don’t know what they want to do,” Steele said.

“I don’t spend a lot of time in my office,” Steele said. “I’m in three schools a week.”

Through a partnership with the Minnesota Department of Education, Steele is qualified to substitute teach classes and also meets with students at their schools to talk.

Having four younger siblings helps Steele relate to younger generations. She also likes to come to different events, and instead of setting up a booth and standing around, she likes to bring fun activities like a rock climbing wall or obstacle course.

A big part of recruiting is talking to everyone involved in a recruit’s decision. Steele meets with parents, grandparents, mentors and really anyone who plays a big role in a recruit’s life. She wants to make sure they have information, too.

“The biggest question parents ask is ‘Is my son going to deploy?’” Steele said.

Steele said most recruits aren’t very concerned about it, and many even hope to be deployed. She said she usually tells parents that at least one deployment is expected but said soldiers also help with flooding, tornadoes and other things right here in Minnesota.

She also helps new recruits figure out what they’d like to do with in the Army. There are 11 categories with 211 different specialties to choose from. And while there’s not always a specific job available, Steele helps recruits pick a few jobs they’re interested in.

She thinks it’s important to help someone who’d like to be a mechanic get that job in the Army because they can learn so much during trainings and deployments. But for some people, she’d rather them get a different job than the current job they have full-time outside the Army so they can experience something different.

In her spare time Steele likes to ride four-wheelers and spend time with her family. She also coaches soccer and ice skating. For now she plans to keep extending her contract with the Army, and she hopes to deploy someday. Though her current job changes a lot and can be stressful, she likes it.