Judy Garland Museum is a sight to see

“Everything is nearly copacetic. I eat the same kind of mustard on my hotdogs every day. It’s Dijon Vu. I picked up a frozen chicken at the Food Crypt and asked one of the workers there if the chickens got any bigger. He told me that they didn’t because they were dead. He was the senior who was kicked off the high school wrestling team for hitting his opponent with a folding chair. I worked for his father in the plumbing business until the incident.”

“I was fixing a toilet and this gigantic dog was staring at me. It growled and drooled. As I toiled at that toilet, a parrot in the next room kept saying, ‘Is that all you can do?’ Stupid bird. I got sick of it. I grumbled, ‘Is that all you can say?’ That’s when the parrot said, ‘Sic ’em!’ I attended the wake of an old friend. He was 95 years old and never had a bad thing to say about anyone. I talked about what a good guy he was. Still Bill asked me what I’d like people to say about me when they looked into my casket.”

“I would like someone to say, ‘He’s still breathing!’” 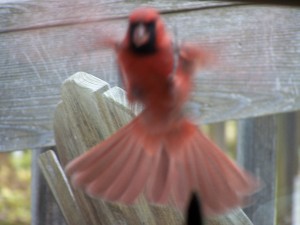 I was working in Grand Rapids recently and was housed near the Judy Garland Museum. Judy, forever remembered for her portrayal as Dorothy in the Wizard of Oz, was born Frances Gumm in Grand Rapids.

I was working in Grand Rapids recently and was housed near the Judy Garland Museum. Judy, forever remembered for her portrayal as Dorothy in the Wizard of Oz, was born Frances Gumm in Grand Rapids. I put on some ruby slippers and took an early morning walk down the yellow brick road. I spent most of my walk looking up. A northern harrier soared overhead. A handsome male — gray with a white rump. Clouds of gulls squabbled over food. A large raven glided past where the smaller crow would have likely been flapping. I encountered no Scarecrow, Tinman or Cowardly Lion, but saw three species of birds that would have made Dorothy change her tune from, “Lions and tigers and bears! Oh, my!” to “Ravens and harriers and gulls! Oh, my!”

Mike Forsberg, an incredible wildlife photographer from Lincoln, Neb., was in a blind along the Platte River near Kearney, Neb., as he watched a flock of snow geese fly over. Mike said it took an hour for the flock to pass. There were as many as 3 million snow geese pausing along the Platte on their migration. That would be an incredible sight to see. That might be as close as we can come to John James Audubon’s witnessing a flock of passenger pigeons so large that it took two days to pass overhead.

“A cardinal is attacking my window. What can I do to make it stop?” Cardinals are notorious for attacking windows. They see their reflections as rivals. The window turns into a mirror at times when the light hits it right. When a territorial bird sees its image in a reflective surface such as a window, it perceives its reflection as a rival and tries to drive the intruder away. This is how the fight starts. Reflections in windows refuse to retreat, so the fight continues. When the cardinal assumes an aggressive pose, so does his opponent in the glass. Maybe this is where Alfred Hitchcock got the idea for the movie, “Birds.” Cover the outside of the window with a screen, soap, cardboard, wax paper, spray frost, painter’s drop cloth or opaque plastic that breaks up the reflection. If you cover the inside of the window, draw the blinds or close the curtains, it aggravates the problem because it enhances the mirrored image. If the cardinal is intent on finding a fight, it will search for imaginary opponents in other windows. Eventually, the bird’s hormonal level will drop or it will become too busy with nestlings and will abandon its attacks upon your window.

“Why do geese honk in flight?” In flocks, it may sound as if they all want to pass, but they call to maintain contact — perhaps with family members. The younger members are likely honking, “Are we there yet?” The honking helps coordinate the movement of the flock. When in pairs, one is telling the other, “Follow me,” “I’m over here,” or “Let’s go.” The female could be asking the gander to stop and ask for directions.

“How long does it take mallard eggs to hatch?” It takes 23 to 29 days or an average of 26. The female does all the incubation.

“How can I see a red-tailed hawk?” Slow down. You will see them along our roads.

A research team led by the University of Winnipeg in Canada recently confirmed that the Geomyces destructans fungus that causes white-nose syndrome in North America originated in Europe, where it is still found but does not cause mass deaths of bats. This suggests that European bats may have faced WNS sometime in the past and the bats that survived evolved to have immunological or behavioral resistance to the disease. This research also demonstrates that the WNS fungus was almost certainly carried, inadvertently, by humans from an infected European cave to North America. Since it was first reported on the muzzles of little brown bats in New York’s Howes Cave, WNS has killed more than 5.7 million bats, according to federal biologists.

Scientist Erin Baerwald reports that about half of the bat corpses found near Alberta, Canada, wind turbines showed physical evidence of being hit by a blade. Ninety percent showed signs of internal hemorrhaging — evidence of a drop in air pressure near the blades that causes fatal damage to the bats’ lungs with a condition called barotrauma. This condition is related to the bends that can affect divers. Bats fly through this area, their lungs expand and capillaries around the edges of the lungs burst.

“Everything you own should have value, either because it’s functional or beautiful or you just love it.” — Peter Walsh

“A bird in the bush is worth two in the hand” — Frank Chapman, ornithologist