Listening to the morning chorus of birds

“Everything is nearly copacetic — other than my diet. If man is not supposed to have midnight snacks, then why is there a light in the refrigerator? I bought one of those police scanners so I can keep up with my relatives and fires. You know, I was a volunteer firefighter for years. A wonderful group of folks. I remember the day it was determined that I was meant for leadership responsibilities within that organization.”

“That’s right. You were in charge of the plastic knives at their annual steak fry,” I say.

“Breakable knives are an unappreciated part of life. The day I’m talking about is when we had a big training session at the fire hall. All the volunteer firefighters were gathered around as the chief quizzed us about things we should have known. The chief knew his stuff. He’d been the chief for longer than he’d been anything. The chief was discussing fire behavior. He said, ‘You pull up to a house and notice puffs of smoke coming from the eaves, the windows are blackened, and there is little or no visible flame. What does that tell you?’ Nobody but me knew the answer. It was a proud moment when I answered, ‘That I have the right house.’” 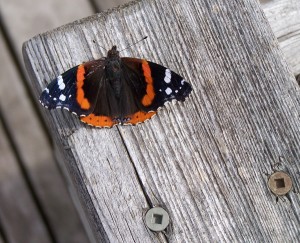 Photo of a red admiral butterfly by Al Batt.

There is music outside my window. No, I’m not spending time on Bourbon Street. I’m listening to the morning chorus. Not all of our avian residents are morning birds, but why are those who are singing so early? I stayed in a hotel recently that had a parking lot so well lit that a robin serenaded guests for most of the night. The dawn chorus is a natural phenomenon that visits the doorstep. It’s easy for us to step out our front door on a spring morning and hear a choir of birds singing. Some folks might grumble about all that cheery singing before the caffeine has kicked in, but the dawn chorus delights me. The reasons for the songs are the need for continual reminders of territorial ownership and not only an endless advertisement for mates, but to remind his current mate that he is available. But why so early? Sound travels better at dawn than later in the day and there is less noise to compete with. Who wants to sing in competition with a lawn mower? A bird might as well sing at dawn because early morning is a poor time to feed. The light makes hunting difficult and insect prey can be inactive in the morning chill.

I listened to the robins, song sparrows and brown thrashers sing. I could almost hear Perry Como crooning, “Oh! It’s a good day, for singin’ a song, An’ it’s a good day for movin’ along. Yes, it’s a good day, how could anything go wrong? A good day from mornin’ ‘till night!” I smiled. It was going to be a good day.

I have seen good numbers of red admiral butterflies this year. This species is a black butterfly with red bands, one in the middle of the forewing and one on the margin of the hindwing. Red admirals depend on stinging nettles as their host plant. Adult red admirals can overwinter and are thought to migrate to the southwestern states, the Gulf Coast (particularly south Texas), and into Mexico. Immigrants repopulate Minnesota each spring. The adults feed on sap flows on trees, fermenting fruit, bird droppings and the nectar from flowers such as common milkweed, red clover, aster, goldenrod and alfalfa. There are other species of butterflies that migrate besides the red admirals and monarchs: the painted lady, common buckeye, American lady, cloudless sulphur, various skippers, question mark and mourning cloak migrate. The red admiral has a rapid but erratic flight and is the butterfly featured by Vladimir Nabokov, an amateur lepidopterist, in his novel “Pale Fire.” This butterfly has two broods from March to October in the north and winters from October to March in places like south Texas.

The plains pocket gopher is a Minnesota gopher that is not the Minnesota Gopher. It eats mostly plant roots but also some aboveground parts, including alfalfa crown buds. They often burrow in the most productive field areas that have the most available food supplies. They destroy vegetation directly over their burrows, creating thin plant stands or bare spots.

Surveys have found that lambsquarters, bull thistle, ragweed, foxtail and cockle are in greater numbers when gopher mounds were present. Gopher mounds on slopes create bare patches that are vulnerable to erosion. Gopher excavation does have some benefits. It increases water infiltration and reduces soil compaction. Gophers reduce alfalfa yields and can damage mowing and baling equipment. Holes near the surface can injure grazing animals. When I was a boy and most farms kept cattle, most farm boys trapped pocket gophers. A boy, finding a gopher mound, used an iron rod to locate the tunnel. The dirt was cleared away and a trap placed into the hole. The hole was covered with a board or cardboard — anything that kept the light out. Minnesota was tabbed the “Gopher State” in 1857 after a cartoon, depicting gophers with the heads of local politicians pulling a locomotive, was published. The cartoon referenced proposed legislation for a railroad in western Minnesota. The 13-lined ground squirrel is the little animal that is the mascot for the University of Minnesota’s Golden Gophers.

The white-tailed jackrabbit changes color with the seasons. In summer, it has brown-gray fur with white feet, belly and tail. Jackrabbits turn white by winter, except for a dark patch on the back of each ear. The jackrabbit is most active from dusk to early morning. During the day, it rests, relying on speed and hearing to avoid predators.

“I don’t forgive people because I’m weak, I forgive them because I am strong enough to know people make mistakes.” — Marilyn Monroe