An Albert Lea man has turned his journal into a book that he hopes helps people understand what it’s like to love and care for someone who’s having health problems. 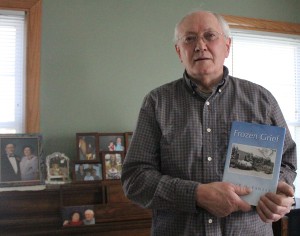 Roger Panzer holds a copy of his book “Frozen Grief.” It will be available in May at Book World in Albert Lea and also online. -- Kelli Lageson/Albert Lea Tribune

Roger Panzer’s wife, Sylvia, had complications during a surgery in 2001 and now lives at Good Samaritan Society. Roger said he’s been journaling through all those years and listened to his friends when they said he should publish them into a memoir.

“This is about three years of our life,” Roger said describing his memoir.

It starts with about two or three months before her surgery where the couple was traveling and enjoying life. It also covers her surgery to fix her cardio myopathy. During the surgery she suffered what’s called a watershed stroke, or a series of small strokes. She’s been in and out of nursing homes since.

Though at times it is hard for him to remember the past 10 years, he believes that no situation is fully bad or fully good.

“There’s always a mixture of good and bad,” Roger said.

Some days he wrote more than others, and he doesn’t plan to stop any time soon. He also writes other pieces for the Washington Avenue Writers Group and is interested in photography. He said the book also has photos of he and his wife.

Part of the reason for publishing the book was for Sylvia to be able to remember the journey and to see what he and their children went through. He’s read some of it to her, but sometimes it’s too hard because the memories can be upsetting. Though they’ve been through a lot, Roger said he works to enjoy each day as much as he can.

“All I have is today,” Roger said. “Yesterday’s gone and tomorrow’s not here yet.”

The book is for sale for $22.99 for hardcover and $14.99 for paperback. It will be for sale at Book World in Northbridge Mall, and there will be a book signing scheduled at a later date. Roger, a former Riverland Community College instructor, will have a book signing at the Albert Lea campus at noon on Wednesday. The book is also for sale online at Amazon.com and Barnesandnoble.com.