The funeral service for Loren Kenneth Steele of rural Alden will be at 2 p.m. Saturday at Concordia Lutheran Church, Pickerel Lake, where he had been a life-long member. The Rev. Wendy Anderson will officiate. Interment will be in Concordia Lutheran Cemetery. Visitation will be from 5 to 8 p.m. Friday at Bonnerup Funeral Service, Albert Lea, and one hour before the service at the church. 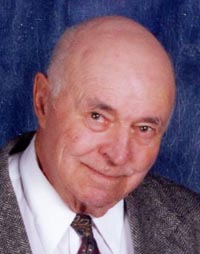 Loren was born on the home farm in Alden Township, on June 29, 1927, the son of Barney and Louise (Behr) Steele.

Loren was baptized and confirmed at Concordia Lutheran Church, Pickerel Lake. He attended school in Conger and then Albert Lea High School.

Loren married Delores Hintz on Oct. 2, 1949, having celebrated 62 years together.

Farming was a way of life for Loren. He enjoyed getting up early, taking care of his farm and his livestock, and driving around checking on the land that he so loved. He also sold Dekalb seed corn for more than 40 years. He enjoyed coffee with friends, playing cards, serving his church, singing and an occasional camping trip with friends. Having the family together and spending time with his grandchildren where special times for him. To Loren, there was no place like home. The farm in rural Alden is where he was born, raised his family and went to his eternal home on Tuesday, April 17, 2012, at the age of 84.