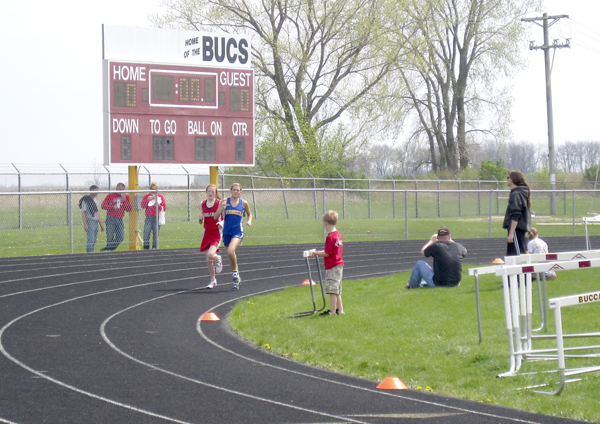 Mantor, a sophomore member of the United South Central-Alden-Conger track and field team, has set school records over the past month without realizing it.

“Normally I yell beat the person in front of her,” Karin said. “I had no idea what the record was, but there wasn’t anyone in front.”

The first time Mantor beat a school record was at the St. James meet on April 5.

Kruckeburg, who was a Blooming Prairie resident in high school, also had a brother and sister with notable track and field careers.

“Emily has worked very hard for the last two years training year round,” Viesselman said. “She not only does the off-season training, but she does it right.”

“It felt good,” Mantor said. “The two-mile is really relaxing. I wasn’t intentionally trying, I just ran it.”

Karin said the second time it was easy to tell she was doing good because she was far ahead of other runners, but there was no way of telling that she was beating a record when it was happening.

“She surprised a lot of people, let’s put it that way,” Karin said. “She’s worked really hard to become a good runner. It wasn’t a natural thing for her.”

Mantor, who started running track in the seventh grade wasn’t so sure it was for her.

In addition to her two-mile records, Mantor set a record in the one-mile race while competing in Mankato. The previous record was 5 minutes and 42 seconds. Mantor beat it by six seconds resetting the record to 5 minutes and 36 seconds.

“She has the ability to race very well at any level partly because she doesn’t worry so much about place, time or competition, but rather how much fun she’s having,” Viesselman said.