“Everything is nearly copacetic. If I were any better, vitamins would be taking me. I put a TV turned to C-SPAN on my lawn. That’s the way I fertilize the grass. I can’t believe gas prices. In my life, it has gone from four gallons for a dollar to $4 for a gallon. I’ve been walking Miss Hathaway home from the bank. She is a fetching lass who still has the first dollar she ever banked. She got a big bonus for suggesting that the bank hand out calendars one month at a time. She seems to care about me. She keeps asking if my tattoos are subject to the law of gravity. She says that I remind her of Johnny Cash’s cousin Petty. Every day, we walk by Grease World. Gobs of good grub are gobbled greedily at that grill daily. The food smells as good as it tastes. So the other day, we’re walking by the eatery when Miss Hathaway said, ’Do you smell that food? It’s incredible.’” 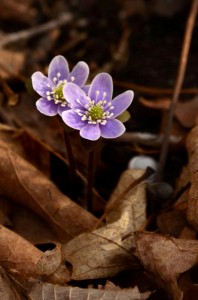 Photographer Darcy Sime of Alden took this photo of hepatica, a perennial.

“Not the most subtle of hints,” I say.

“Being the nice guy I am, I thought, ‘Oh, what the heck, I’ll give Miss Hathaway a treat.’”

“No, I walked her past the restaurant again.”

They need a pogo stick

I saw an opossum run over on the road. A car had hit it. Why did the chicken cross the road? To show the opossum it could be done. Opossums don’t understand cars. They stop in the middle of a road to look at a speeding automobile. As Pogo Possum, in Walt Kelly’s famed comic strip, said, “We have met the enemy and he is us.”

The Virginia opossum, with 50 teeth, is an omnivore that eats nearly anything. It has two litters of 6 to 20 each year. They have many babies so that some might avoid being hit by a Buick.

It was March and I was tailing a butterfly that was flitting about my yard. The mourning cloak that settled on a clothesline post to do some sunbathing wintered in the adult form. Not many butterfly specifies do that here. I am glad this one did.

As I picked up sticks freed from the trees in our yard by winter winds, I was guided by a spring wind. I felt like a pigeon perched on a wind vane during a tornado. I spotted a plastic shopping bag hooked on a tree branch. The bag, once litter in a road ditch, was flapping in the wind. I thought of Joyce Kilmer who wrote, “I think that I shall never see, a poem as lovely as a tree.” As I watched the bag belittle the tree, my mind wrote, “Oh, how I hate to see, another plastic bag in a tree.

Later that same day, I was traveling down a freeway when I spotted a dead fox squirrel in the passing lane. It was an odd location for a late squirrel for several reasons. First, roadkill isn’t going to pass anyone. Second, it was a tree squirrel and there wasn’t a tree anywhere near. I suppose the poor squirrel was searching for a tree when it was struck by a Scion.

“How many birds are killed by wind turbines?” In 2009, the United States Fish and Wildlife Service estimated that 440,000 birds were killed each year by collisions with wind turbines. Many things kill birds. Lighted communication towers kill 4 to 10 million birds annually. High-tension transmission and distribution power line strikes kill as many as 174 million birds annually. Electrocutions kill tens of thousands of birds. Cars kill 50 to 100 million birds each year. Dr. Daniel Klem of Muhlenberg College has done studies on bird collisions with windows for more than 20 years. Building window strikes account for 97 to 976 million bird deaths each year. Klem concludes that glass kills more birds than any other human related factor. The National Audubon Society says 100 million birds a year fall prey to cats. Pesticides poison an estimated 67 million birds per year according to the Smithsonian Institute. Cutting hay kills up to a million birds a year. Suburban sprawl, logging and strip mining are silent killers. The loss of bird habitat is the greatest threat to bird populations. The U.S. Fish and Wildlife Service reports that up to 2 million birds died landing in oil pits to bathe or drink and that hunters legally harvest more than 100 million birds each year.

Kathy Spooner of Hartland asks when our juncos leave. They migrate from early March well into May.

“How big are coyote litters?” They average five to seven pups. The primary breeding season is in February with the births generally in April.

“Do both bald eagles incubate the eggs?” The female and the male take their turns during the 35-day incubation period, but the female does the greater share.

Leon Schoenrock of rural New Richland asks how to tell a male Canada goose from a female. Canada geese are sexually monomorphic — male and female geese have identical plumage. A gander is typically slightly larger than the female and more aggressive, especially when protecting the nest.

Valerie Phillips of Hartland asks how to tell a weasel and a mink apart. A weasel is seven to 14 inches long, a mink 16 to 29 inches. A mink is dark with a white spot on the throat while a weasel is yellowish-white underneath and has a black tip on its tail.

“How wonderful it is that nobody need wait a single moment before starting to improve the world.” — Anne Frank “Humor is by far the most significant activity of the human brain.” — Edward De Bono

Al Batt of Hartland is a member of the Albert Lea Audubon Society. Email him at SnoEowl@ aol.com.