Marylin Jeanne Bretzke (Larson) passed away peacefully on April 15, 2012, at the Long Term Care Center, Northfield, with family and friends close at hand. She will be remembered for her amazing energy and love of life. 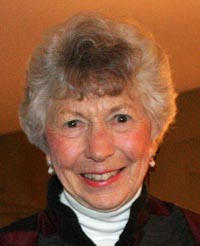 Marylin was born Feb. 2, 1929, in Albert Lea, to Ebba and Kie Larson. She attended Monmouth College and the University of Minnesota where she received her Bachelor of Arts degree in social work. While at the university she met her future husband Dr. Carl Bretzke. They were united in marriage on June 21, 1952, and spent the majority of their married life in Hutchinson where they enjoyed the friendship of so many wonderful people.

Marylin’s love of children, concern for the disadvantaged and genuine interest in others led her to a life of caring and volunteering. Her service included assisting in the establishment of Averyon Homes (a series of homes for people with special needs), service in Parents Anonymous, P.E.O, the Hutchinson Food Shelf, The First Congregational United Church of Christ in Hutchinson, the Hutchinson Community Hospital and A.F.S.

The family would like to thank her many wonderful friends, the care givers at the Long Term Care Center in Northfield, and the St. Olaf, Carleton, and community volunteers who enriched the last years of her life with companionship and joy. Suggested memorials to Averyon Homes, The First Congregational United Church of Christ, and WINGS.

A memorial service will be held at 11 a.m. Tuesday, May 1, at the United Methodist Church, 1401 Maple St., Northfield. A lunch reception will follow. Visitation will be one hour prior.