Momentum can sing, swing or sting

This week I want to talk about momentum. Momentum is forward movement. It is the energy and drive behind something.

In the spring of 2003, three young filmmakers traveled to Africa in search of a story. What started out as a filmmaking adventure became much more when Jason Russell and friends stumbled upon Africa’s longest-running war — a conflict where children were both the weapons and the victims. 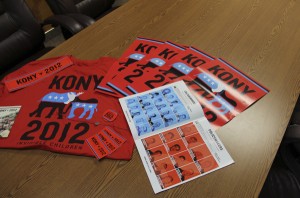 Propaganda aimed at bringing attention to the victims of Ugandan rebel Joseph Kony. It was meant for being posted around the community.

They produced the documentary “Invisible Children: Rough Cut” in 2005. At first they just showed it to their friends and family, but it wasn’t long before millions of people had seen the documentary and knew about the “invisible children.”

We are storytellers. We are visionaries, humanitarians, artists and entrepreneurs. We are a generation eager for change and willing to pursue it.

How we make a difference.

Since 1987, Joseph Kony has abducted more than 30,000 children in Central Africa and forced them to be child soldiers in his (LRA) Lord’s Resistance Army. The Kony 2012 campaign employs film, social media, street art and face-to-face interaction to make the case that the arrest of Joseph Kony this year is one thing we can all agree on.

Half our work happens on the ground in Central Africa, and the other half happens in the United States.

In Central Africa, all of our programming is a partnership between Invisible Children and LRA-affected communities. We focus on long-term goals that enable children to take responsibility for their futures and the futures of their countries. In areas where the LRA is still active, we focus on civilian protection and rehabilitation.

Our work in the United States focuses on advocacy and inspiring America’s youth to “do more than just watch.”

When I went to the website and watched the film featuring Jason Russell and his young son, I was hooked but cautious. Anytime a movement happens and asks you for a donation, I am a bit skeptical. Everyone should be. The Internet can be a vicious and scary place. When you combine the Internet with donating money, you need to be extra careful.

I donated $29.99 for a starter kit. This kit arrived eight weeks after I ordered it because of the backlog of people waiting. The kit, which included a T-shirt, posters, bracelets, bumper stickers and a booklet, was for the guerilla marketing of April 20 “Cover the Night” project. On April 21 all villages, cities and towns were supposed to be covered with the messages of Kony from the night before — the end game of the most successful viral video campaign ever. The thing was a flop. Hardly anyone came out.

Why? I will give you my opinion and that is momentum.

We have a short-lived attention span. The Invisible Children campaign became not just about Joseph Kony and the victimized children. It became about the guy ultimately telling us of Kony’s transgressions — Jason Russell.

The filmmakers’ “Kony 2012” video starred not only Kony himself, but also invited viewers to see Kony through Jason Russell’s group’s story, and of Jason Russell’s child’s story.

The part of this movement and video that made it all so believable was how it tied Jason Russell’s son to the atrocities of Kony.

So now what you have is a great movement based on actual terrible events that is tied to one person, Russell, when it should have been about Kony.

Momentum is strange. It can be the best thing ever but also the worst. You can also have momentum while spiraling downward and that is what happened when Jason Russell, age 33, became a news item himself.

Russell was reportedly receiving medical care after witnesses said he was seen running around naked and disrupting traffic in a San Diego neighborhood. Russell allegedly was walking around an intersection wearing “Speedo-like underwear.”

This was reported by every major news organization and was supported by video. Any momentum that was driving incredible numbers on Twitter and Facebook (3.2 million likes) was quickly dashed. The movement is still going as $3.5 million has been pledged, and Invisible Children still has a quality team in place, but the film that had 104 million views in the end did not use that drive to rally the money that was once a no-brainer.

I learned many lessons in watching this phenomenon grow and ultimately fall.

The first is to be careful of who, what, when, how and why you get behind a movement — even a movement with the best intentions. Study it. Know exactly where your money is going and what is it funding.

Finally I learned and would like to pass on the need to stay informed. Being informed about what effects you, your neighbors and our world is a great way to becoming a great neighbor. Locally and globally, we all have important roles in helping others, and we can do that best by educating ourselves.