Quality is their main concern 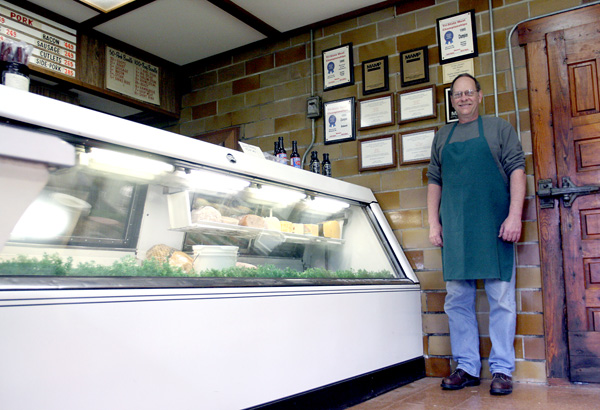 Brian Jordahl, of Jordahl Meats in Manchester, stands next to the meat counter and awards he has won over the years. -- Brandi Hagen/Albert Lea Tribune

“You get what you pay for,” Brian Jordahl of Jordahl Meats said. “My motto is: Meat is our only business and quality is our main concern.”

Jordahl’s father, Merle, and uncle, Oscar, started Jordahl Meats in 1948 just a few miles north of Albert Lea. Before starting their own business the Jordahls were the head of beef and hog kills at Wilson & Co., a meatpacking plant in Albert Lea that eventually became owned by Farmland Foods and, in 2001, burned and closed.

When the two retired in 1980, Jordahl took over.

For 12 years, Jordahl entered his meat products in a tri-state competition including Minnesota, North Dakota and South Dakota. Each year he brought home an award.

Doubting himself, Jordahl didn’t think he had a shot at winning anything the first time he competed in 1986, but he thought if other meat processors from the area were competing, he might as well too.

Jordahl offers other favorites seasonally and after taking his dog to the veterinarian, he decided to include dog treats in his inventory.

Jordahl said it is becoming harder and harder to be a local meat processor.

“There’s one farm when there used to be 10,” Jordahl said.

Because of that, Jordahl has started selling to local restaurants and building up a retail trade.

He also said it’s becoming difficult because of new regulations being passed.

“They probably need to be passed, but they’re for the big guys,” Jordahl said.

One misconception Jordahl said people have about the small town business is that it’s more expensive than the big name grocery stores, but Jordahl said most times he’s actually cheaper.

Jordahl said those larger companies are driving the little guys out of business.

“Ten years from now, I’m sure they won’t be hardly any places like this,” Jordahl said.

Even so, Jordahl has loyal customers who come from all over the United States for his products.

“When someone orders something and you work special to get them what they want and they come back and say ‘thank you, that was the greatest thing, you made our party’ that makes me smile,” Jordahl said. “And that’s the best advertising. You can’t buy that, you have to earn it.”