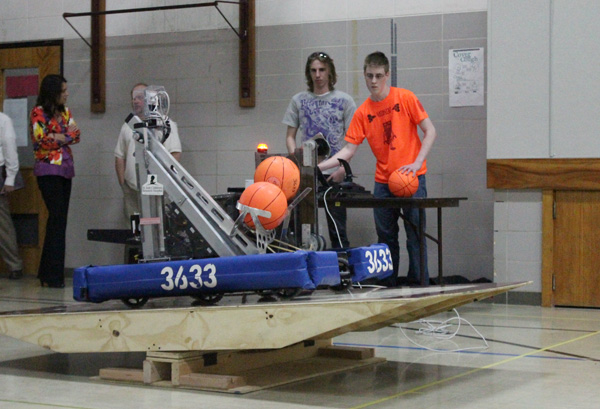 The Albert Lea High School robotics team, Catalyst, is back from the regional competition and are happy they did better than last year.

Students from the team, Mark McGivern, a junior, Bradford Milliron, a junior, Carson McGivern, an eighth-grader, and Kristen Sandagar, a junior, showed how the robot can be operated by a joystick or by a Microsoft Kinect. The team placed 27th at the competition out of about 60 teams but did not make it to the finals competition.

All the teams were given a Kinect, and for the first 15 seconds of competition were only able to use that to control the robot. Mark McGivern said most schools didn’t use it.

“We were best at scoring with the Kinect,” McGivern said.

He said teammate Amber Bergland had perfected using the Kinect. After the first 15 seconds, the students controlled the robot using a joystick as well. Then there was the part of the competition where they could team up with other robots to try to balance on a teeter-tottering bridge.

One of the teacher advisers to the team, Mike Sundblad, said all the robots are different even though all teams get the same pieces of equipment to use.

“You get all the parts but no manual,” Sundblad said.

The ALHS robotics team is in its second season this year and participated in one of 70 regional FIRST Robotics Competitions at Mariucci Arena in Minneapolis March 29-31. The theme this year was “Rebound Rumble.” FIRST stands for “for inspiration and recognition of science and technology.”

One of the team’s faculty advisers, Ken Fiscus, said the team worked around 1,000 man hours building its robot, and more than 30 students were at the high school seven nights a week for 6 1/2 weeks working.

“We had a pretty good robot and had a strong team,” Sundblad said.

The team’s robot weighs 116 pounds and has six-wheel drive, powered by a battery that can produce 1.2 kilowatts of energy. The machine picks up balls with a belt system and shoots them using a catapult.

The team gave a demonstration to the school board Monday night.