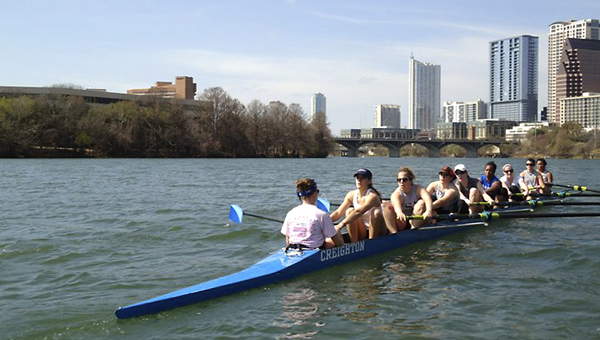 A rowing team from Creighton University rows during a competition in Texas. Lauren Klick, a 2010 graduate of Albert Lea High School, is a member. -- Submitted

A hockey player of 12 years followed her older siblings to college at Creighton University in Omaha, Neb.

Little did she know, she would give up her hockey stick and body armor of hockey pads to become a member of the rowing team.

Creighton sophomore Lauren Klick has been on the rowing team since she started at the university last year. Convinced by her college roommate and another member on the rowing team, Klick joined in. The only thing she knew about it was what she had seen on the Olympics.

When Klick is in a race, her team will row a mile and a half with seven others.

Harder than it looks, Klick said rowing 1.25 miles over the course of seven minutes is equivalent to playing back-to-back basketball games.

“Last year at conference I couldn’t even move my arms because they were so tight from rowing,” Klick said.

She said it takes a lot of strength to row, but that doesn’t bother her. The most difficult part has been starting her day at 5 a.m. instead of 10 a.m.

“I think hockey conditioning helped to get into this,” Klick said. “It was a completely different sport, but if I wasn’t as athletic as I am, I wouldn’t have been able to transition so easily.”

The team practices on the water six days a week and conditions five days a week.

Klick said race days are similar to a track and field event. There are multiple races going on.

Creighton has about eight boats that compete in races.

Klick has had success with her team since she joined.

“I was probably making the top boat as a freshman,” Klick said. “I was scared at first because all of the others were juniors and seniors and I didn’t know them before. But, I don’t think I would have liked it so much if it wasn’t for the people on my team.”

During a home race in 2011, they won the overall points award and also the Decker award, an award given to the first-place boat in the top-eight race.

Getting ready for a race is different than other sports.

“We relax a lot before a race because it takes so much out of us,” Klick said. “It’s all about focus and concentration, so before a race I eat a lot and listen to music. It calms me down.”

Klick has done so well that she has received a scholarship for rowing.

As far as hockey goes, Klick said she hits the puck around with her friends when she’s home on Christmas break, but can’t participate in other sports while being a member of the rowing team to avoid injury.

As Klick continues to major in biology and exercise science at Creighton, she said will continue to row.