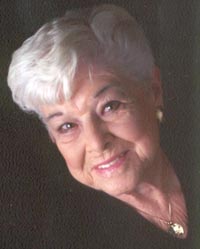 Friends and family will gather in Northwood, Iowa, this week to remember Shirley and her exceptional life. The viewing will occur at the Conner Colonial Chapel, 1008 First Ave. South, Northwood, from 4 to 7 p.m. today followed by the funeral service at 11 a.m. Thursday at the Northwood United Methodist Church, 1000 First Ave. North, with the Rev. Wendi Gillan officiating.

Memorial flowers may be sent to the Conner Colonial Chapel, and donations given to the Susan g. Komen for the Cure, in honor of her daughter.

Born on Sept. 10, 1920, in Worth County, Iowa, Shirley was the daughter of Claude and Ruth “Hazel” (Buchanan) McQuatters. Shirley graduated from Northwood High School and received a secretarial degree from Hamilton Business College, specializing in shorthand. All who knew Shirley remember her as a woman of style and substance. Professionally, she was a hard worker with a brilliant array of careers, including U.S. Army secretary, bookbinder, movie theater owner, bowling alley and restaurant owner, cook and bowling instructor. Personally, she was an adored wife, and devoted mother, a beloved grandmother, a proud great-grandma, an influential youth mentor, a dynamic friend and a vibrant community member. Some of Shirley’s greatest joys in life were music, reading, travel, sunshine, theater, golfing, baking, and most of all, spending time with her family.

She was preceded in death by her sister, Laura (McQuatters) Lanstrum; her brother, Earl “Philip” McQuatters; her inspiring daughter and dear friend, Mary “Sue” (Drury) LaGow; and her husband of 50 years, Herschel Ralph Drury, who always called her his “bride.”