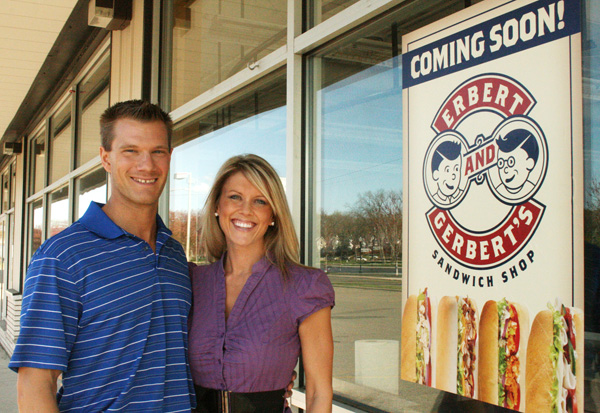 A quick-service sandwich shop in several college towns in the Upper Midwest will be adding a location in Albert Lea in the next three months.

Erbert & Gerbert’s Sandwich Shop will open in a portion of the former Blockbuster building off of Bridge Avenue before the Fourth of July.

Owners Kurt and Alicia Wallace of Albert Lea posted a sign on the building about a week ago telling people about the venture, and buzz has already started in the community.

“It’s just delicious,” Kurt Wallace said. “Each sandwich has its own ingredients.”

The company, which touts its flavorful sandwiches, started more than 20 years ago in Eau Claire, Wis. It has since expanded to about 50 sandwich shops across the country, mostly in the Upper Midwest.

Wallace, an Albert Lea firefighter, said he has been in the process of bringing the chain into Albert Lea for more than a year, so when the opportunity arose where he had an investor who was willing to back him, he began to take the necessary steps to open the business.

Plans worked well in the former Blockbuster location, and he said he likes how close the restaurant will be to Fountain Lake.

Because the business will offer a drive-through window and delivery, he noted that boaters can call in their order and then someone from the company can run across the street and deliver the order.

“They don’t even have to leave their boat,” Wallace said.

In addition to unique sandwiches with names such as Narmer, Bornk and Girf, there will also be 15 soups on a rotating basis, he said. Prices average about the same or maybe even a little cheaper than other sub shops in town.

It will be the fifth restaurant nationally in the chain to have a drive-through window.

Wallace said he planned to receive the construction plans from his architect today and hopes to start construction on May 1.

He and his wife plan on having about 20 employees, including a general manager, of which they will begin hiring in June.

One of the company’s marketing strategies is to give out free samples of their sandwiches, including party platters at businesses.

“We know that once they try it they’ll be back,” he said.

Wallace said he is excited to bring the chain to Albert Lea and worked hard to bring it here — before it could go to a surrounding community such as Austin or Owatonna.