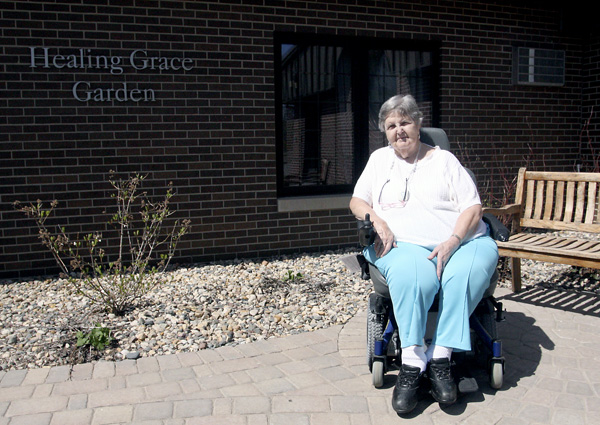 Shirley Fogerty, a resident of Good Sams since June 2009, just celebrated her 80th birthday on March 30, but she doesn’t let her age define who she is.

Known as the peppermint patty girl, Fogerty has made it her job to greet each new resident of the rehabilitation unit with a welcome letter signed by residents and a peppermint patty.

“I enjoy people,” Fogerty said. “And I realize I’ve known a lot of people. When they come in, the name hits me right away and I have to go see if that’s the person I think it is.”

Fogerty also dedicates time to delivering mail and newspapers and attending chapel just about every day.

Fogerty, who said she spends 95 percent of her time outside of her room, tries to encourage other residents to do the same.

“If there’s anything to do, I guess I’m there to do it,” Fogerty said. “If you sit in your room all the time, you become a hermit.”

Fogerty said the one thing she really encourages others to do is attend the chapel service of the Rev. Kent Otterman, the full-time chaplain at the facility.

“I feel that if you are going to chapel and being with other people, you feel so much better,” Fogerty said. “I know I do.”

Fogerty’s bubbly personality rubs off on the staff she works with as well. She said there are mornings that at 5 a.m. they are just having a ball.

“Life is what you make of it,” Fogerty said. “Here or any place else.”

Some of the games the residents play on the Wii include bowling, “Who Wants to be a Millionare” and “The Price is Right.”

Thorland said that Fogerty’s drive to keep other residents involved and socializing has had a positive outcome. On satisfaction surveys, the short term rehabilitation patients have commented they were happy someone greeted them like Fogerty did.