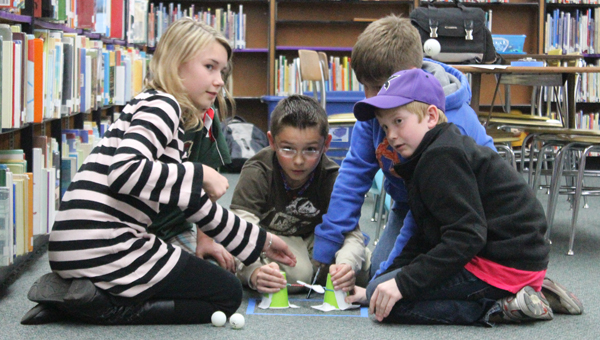 Seven Destination ImagiNation teams are headed to the state tournament Saturday, and one team has been preparing up until the last minute. 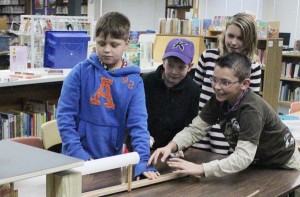 Team members from left Jake Ball, Logan Howe, Rowan Kraft and Braden Kraft experiment with their creation for the state tournament of Destination ImagiNation, which will be this Saturday.

One of Lakeview Elementary School’s teams, The Curious Tigers, is competing in a structural challenge at the competition. Even though their structure is ready (and already won them a trip to the state tournament at regionals) they still have to practice for the surprise challenges they’ll face.

“The structural part is the main challenge, then they have an instant challenge,” coach Jason Kraft said.

For the structural challenge the students had to create a structure out of only wood and glue that can withstand large amounts of weight. At regionals the team’s structure held 345 pounds. Not only does it have to hold weight, they have to shoot golf balls into it using a tube and they have to act out a skit they wrote themselves.

Their skit is about the RMS Titanic — which sunk 100 years ago this Sunday — and it ties into the structure part by pretending the golf balls are coal to fuel the ship and the weights are to steady the ship. After the structural challenge, they’ll have a surprise instant challenge. The team won’t know what the challenge is until right before the competition, and they’ll be given the tools they need to complete the challenge.

“The judges are really looking for teamwork in the instant challenge,” Kraft said.

The Curious Tigers are made up of fifth-graders Jake Ball and Rowan Kraft and fourth-graders Maddie Prihoda, Kaitlyn Komoszewski, Nathan Siefken, Logan Howe and Braden Kraft.

“This is such a neat opportunity for the kids,” Kraft said. “It’s neat to see them come together as a team.”

Each student has their own responsibilities in terms of building and operating the structure, writing the script, making costumes and so on. The students said they’re looking forward to the state competition and that they improved on their projects based on comments from judges at the regional competition.

Nine of the district’s teams competed at a regional competition in Rochester on March 17. The state competition will be at Jackson Middle School and Champlin Park High School, both in Champlin, on Saturday. The public is invited to attend.

While the problem-solving competition Destination ImagiNation has been around nationally since 1999 (and before that as Odyssey of the Mind), this was the first year Albert Lea offered it to students. It’s an extracurricular program that recommends teachers nominate top students’ work on creative and critical thinking as teams. Destination ImagiNation is for all ages from kindergarten through the college level.

Teams are told in advance what the competitions will be in categories like technical, scientific, fine arts, improvisational, structural, Rising Stars or Project Outreach.

For improvisational, students had to research news stories on their own and use cooperative human scenery and props to create an improv skit that related two news stories. For structural, students had to design, build and test a structure made of wood and glue that would have to hold weight. For fine arts, students presented a skit of a movie trailer that had to involve characters from two nations, a soundtrack and a special effect.

All leaders have a team manager who isn’t allowed to actively participate in the planning for competitions. It’s all up to the students to work toward the goal.