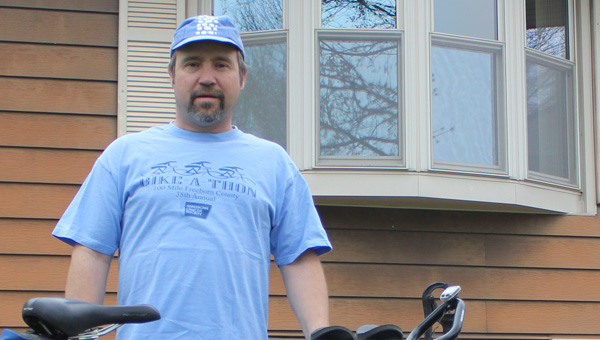 Ken Dreyling poses for a photo outside his home in Albert Lea. Dreyling is helping organize the Freeborn County Bike-A-Thon that takes place May 5. -- Kelli Lageson/Albert Lea Tribune

An Albert Lea man who rode in the Freeborn County Bike-A-Thon for 20 years wanted to make sure it will stay a fixture in the community, which is why he joined its committee.

Ken Dreyling had been riding in the annual 100-mile bicycle ride for years just because of what the event does, which is to raise money for the American Cancer Society. But when his mom was diagnosed with cancer everything changed.

“It had more meaning for me,” Dreyling said.

In 2003 he started volunteering and had to quit riding in the event because of all the work needed on the big day. With everyone’s hard work Dreyling doesn’t see the event ever going away; in fact, it is in its 40th year now.

Dreyling said the committee works hard, with everyone having their own responsibilities. He helps organize rest areas, food donations and marking the route, with help from Mike Juntunen.

Over the years there has been a small decline in the number of riders, but Dreyling said he’s not worried since the amount of donations has continued to rise.

Dreyling said safety is important to the committee, and they’d like to remind people to watch out for riders and keep track of their pets on the day of the event, which is May 5.

Dreyling said the event wouldn’t be possible without all the dedicated volunteeers, including local law enforcement and fire fighters and the Rev. Richard Spande who says a prayer before the Bike-A-Thon begins.

“I just want to say a special thanks for all the volunteers who make this possible,” Dreyling said.

He also was appreciative of community members who are respectful of riders and who come out at 6 a.m. to cheer on the riders at the start.

“We encourage people to come out and cheer riders on,” Dreyling said.