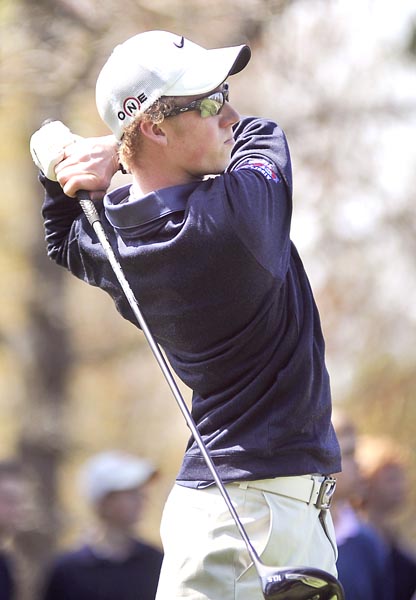 The Albert Lea boys’ golf team beat Rochester Century by 10 shots on Tuesday during a triangular with Austin at the Austin Country Club. 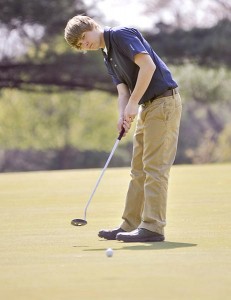 Albert Lea's Brent Nafzger putts on hole No. 2 during a triangular with Austin and Rochester Century Tuesday afternoon at Austin Country Club.

“Century was a pre-season favorite to win the conference,” Tigers coach Riley Worth said. “To put it in perspective, they didn’t play up to their ability. You want to beat a team when they’re playing their best and when you’re playing your best.”

“It wasn’t necessarily the score that I’m proud of today,” Worth said. “It was that we outplayed our competitors.”

Brady Falk led the meet with a 78.

Worth said it didn’t start out that way.

“He had a disasterous start. He was seven over par after six holes,” Worth said.

For the remaining 12 holes, Falk shot one under par to put him in the lead.

Lucas Peterson was just behind Falk with a 79.

“Lucas is probably the player I’ve been the most impressed with so far this year compared to what I expected,” Worth said. “I knew he was going to be a good player, but he’s had a nice start to the year.”

Worth said it’s all about Peterson’s work ethic.

“He was struggling with his putter; he has now turned that into the strength of his game,” Worth said.

Amongst the Tiger golfers, Nate Stadheim was third with an 83, Brent Nafzger had an 87, Brady Loch had a 90 and Alex Severson had a 96.

Worth said he doesn’t really know who the sixth varsity golfer is.

“We have a lot of players vying for that last spot, but nobody has really stepped up and claimed it so far,” Worth said.

The Tigers’ next meet is at home Tuesday against Rochester John Marshall and Winona.