Katherine Ann Skaar and Kelly Lynn Garner were married at Hayward Lutheran Church, Hayward, on Feb. 11, 2012. The Rev. Katie Fick officiated. The ceremony was held at 11 a.m. followed by a light lunch in the social hall. 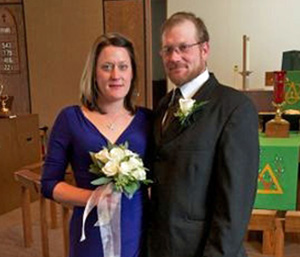 Katherine is the daughter of Neal and Jean Skaar of Hayward. Kelly is the son of Jackie Allen of Spencer, Iowa, and Donald Garner of Mason City, Iowa.

Music was provided by Nate Skaar of Cedar Falls, Iowa, and Rebecca Skaar. Candle lighter was Bryce Hoyt of Glenville. Scripture was read by Neal Skaar.

Thanks to Vern, Pat and Sarah Frydendlund and to Alex and Kisti Skaar for assisting with serving lunch.