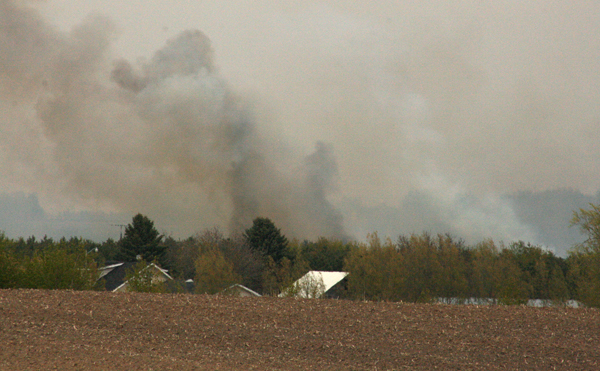 LAKE MILLS, Iowa — A fire burning east of Lake Mills and south of Emmons on Thursday afternoon burned close to 200 acres, including many trees, according to Lake Mills Fire Chief Dave Anderson.

The blaze was contained at 6 p.m., a little more than four hours after firefighters were notified of an Iowa Department of Natural Resources controlled burn that had gotten out of control.

The fire began on the south side of gravel 440th Street — off of Bluebill Avenue — and then spread north, Anderson said.

No homes were damaged, and there was no significant property damage other than to DNR property. The fire at its worst engulfed a series of pine trees at least 80 feet tall.

“Those pines, they go so fast,” he said. “When they burn, those flames go so high in the air.”

He guessed that the windy weather conditions contributed to the spread of the fire.

Anderson said when he and other firefighters first arrived at the scene the wind was blowing to the northeast, but after a while it changed to the northwest. He noted that the change in wind direction actually slowed down the fire.

“If anything, that helped us,” he said.

As firefighters battled the blaze they were able to save hundreds of trees.

The Worth County Sheriff’s Office and DNR representatives also assisted at the scene.

The fire was in western Worth County.