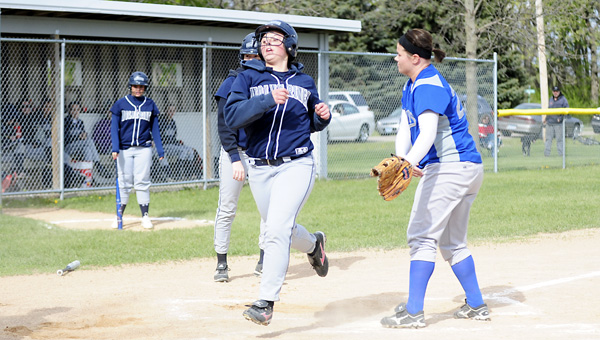 Jamie Williamson runs home after getting on base with a triple in the bottom of the first on Friday.

GLENVILLE — The Glenville-Emmons softball team picked up a 15-3 win over Martin Luther on Friday.

After losing five straight games by no less than 11 points, the Wolverines welcomed their five-inning win over the Mustangs to give them a 1-5 overall record. 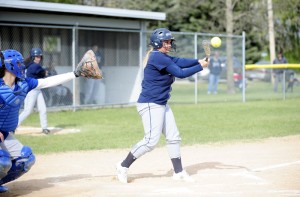 Glenville-Emmons pitcher Bre Lundmark swings at a ball on Friday. Lundmark hit 3-4 with an RBI and a triple.

After two innings, the Wolverines had a 6-1 lead, but their coach Lisa Ziebell wasn’t convinced quite yet that it meant a win was in their future.

“Every night this year we’ve had two solid innings,” Ziebell said. “So what was going through my mind was that we needed a few more runs.”

Ziebell encouraged chatter among her team to keep them pumped up and to make the Mustangs’ pitcher nervous.

“They realized the more noise and encouragement they gave each other, the better they did,” Ziebell said.

In the first inning the Wolverines’ pitcher Bre Lundmark struck out the Mustangs within four players.

“Getting through the first two innings and going into the third with them having just one run on the scoreboard was huge for our girls,” Ziebell said. “They started to think they could pull it off.”

In the bottom of the first, Jamie Williamson scored the first run for Glenville-Emmons after hitting a triple.

“When the girls see another girl getting a hit like that it gives them a boost because then they think if she can do it, then so can I,” Ziebell said.

Williamson was followed by Meagan Nelsen, Lundmark and Courtney Williamson to the bases loaded. Next up was Anna Severtson who was walked to first. Nelsen was pushed ahead to home for the Wolverines’ second run.

In the second inning, the Mustangs’ catcher fumbled with the ball several times allowing four girls to run home.

“It was fun to see them having a good time,” Ziebell said. “It’s been a slow start for us while playing good, hard hitting teams.”

For the first time this season, the Wolverines scored in every inning.

“I told them, you win one inning at a time,” Ziebell said.

Ziebell was proud of Williamson’s hitting and Lundmark’s overall play.

“It’s one thing to go out and pitch a game like that, but then Bre struck from the offense end too.”