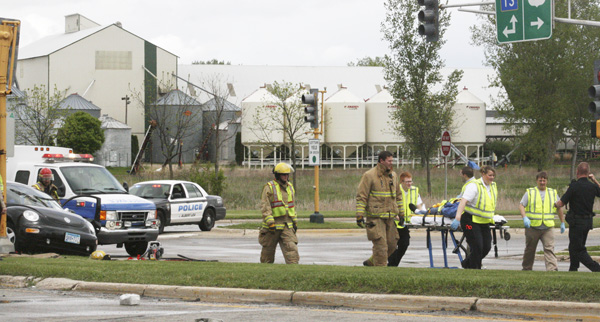 Emergency crews from Mayo Clinic Health System in Albert Lea transport a woman on a stretcher to an ambulance after a crash at Minnesota Highway 13 and West Main Street near Graceland Cemetery. -- Sarah Stultz/Albert Lea Tribune

An Albert Lea woman was injured Tuesday afternoon after a semi reportedly ran a red light and crashed into her car at the intersection of Minnesota Highway 13 and West Main Street. 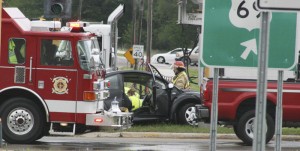 Emergency crews respond to a semi versus Volkswagen Beetle crash Tuesday afternoon. A woman had to be extricated fro the Volkswagen. -- Sarah Stultz/Albert Lea Tribune

Delcie Lee Brandt of Albert Lea was extricated from a black Volkswagen Beetle and transported by ambulance to Mayo Clinic Health System in Albert Lea.

Hospital spokeswoman Jennifer Levisen said Brandt was treated and released to another hospital.

Albert Lea Police Lt. J.D. Carlson said Brandt was conscious when emergency personnel arrived at the scene; however, she reportedly suffered from a head injury. 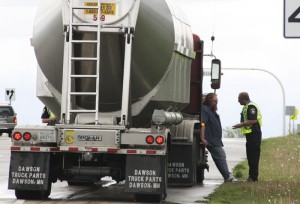 An Albert Lea police officer talks with the driver of a semi involved in a crash Tuesday afternoon at the intersection of Minnesota Highway 13 and West Main Street. --Sarah Stultz/Albert Lea Tribune

According to police, the semi, driven by Gary Leroy Sordahl, 42, was traveling southbound on Minnesota Highway 13 just before 1:30 p.m. when it collided with the Volkswagen. It is unclear which direction the Volkswagen was traveling.

The semi driver pulled off to the side of U.S. Highway 69 near the United Methodist Church after the crash and could be seen talking to an officer as emergency responders treated Brandt.

A report later in the day stated Sordahl was not feeling well.