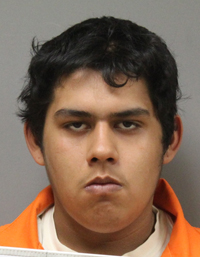 Adrian Castillo Jr. was arrested for allegedly pointing a rifle at a victim and then striking them with it. The rifle was owned by the homeowner.

Police said Castillo then took items from the residence at 1221 St. Joseph Ave. around 11:15 a.m. Tuesday. After taking items, Castillo further assaulted the victim and fled, according to the Albert Lea Police Department.

The victim, a male, had injuries to the left side of his face and was transported to and released from Mayo Clinic Health System in Albert Lea. Albert Lea police said the injuries were not life-threatening.

Officers found Castillo, who was then arrested on probation violation and for possession of cocaine. A search warrant was conducted at Castillo’s residence later, and clothing and items were taken.