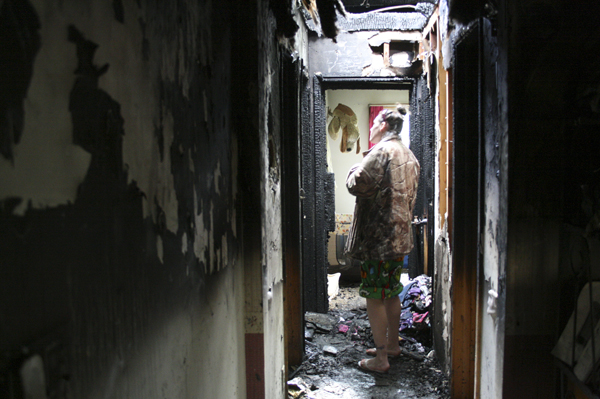 Samantha Meeks looks into the bedroom of a house on High Street in Emmons where a fire reportedly started early Wednesday morning. Meeks was in the room below in the basement when her baby began crying and they found the fire. -- Sarah Stultz/Albert Lea Tribune

EMMONS — An Emmons mother was calling her 10-month-old baby a hero Wednesday after the baby alerted the family to fire in the house. 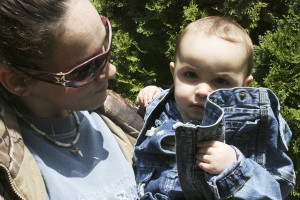 Khalette Meeks-Radke, 10 months, is being called a hero by her family Wednesday after she began crying and alerted them to a fire in their home. Her mother Samantha Meeks said she doesn’t think the whole family would have gotten out safely if it weren’t for Khalette.

Samantha Meeks said if it weren’t for her baby, Khalette Meeks-Radke, she and her family might not have made it outside of their house alive during a blaze early that morning.

Their house, at 270 High St., has been declared a total loss, according to fire investigators. The cause of the blaze is undetermined.

“If we wouldn’t have been here, Deb would have burned to death,” Meeks said.

Deb Radke, the owner of the house, is baby Khalette’s grandmother. She was in the room on the main level where the fire started and was taken to a local hospital for smoke inhalation.

Her condition is unknown.

Meeks said at about 5:30 a.m. Wednesday, she and her boyfriend, Anthony Radke, were sound asleep in the basement of the rambler-style house when she was woken up by Khalette crying.

Khalette — in her crib — was directly below the bedroom upstairs where a fire was burning. Ashes had begun to fall through the ceiling into the crib. 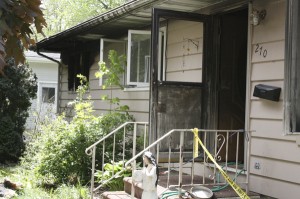 Windows and doors at 270 High St. in Emmons were open Wednesday afternoon after a fire badly damaged the house earlier that morning. The house has been deemed a total loss.

After waking, the parents saw the blaze above and sprung out of bed, grabbed the baby and Meeks’ 3-year-old daughter in another room and then darted upstairs.

There, Anthony Radke scrambled down the hall to the room where his mother, Deb, sleeps, with an oxygen tank in the room. The door was stuck shut.

Meeks said he busted the door down with his shoulder, and helped his mother outside. Two Chihuahuas and a puppy also survived.

“I started crying,” Meeks said. “I just realized we don’t have insurance.”

When Emmons firefighters arrived at the house, flames were barreling out of the front. Meeks estimated it took about an hour to extinguish the blaze. Though it has not been determined yet, the family is suspecting that Deb Radke fell asleep with a cigarette in her hand. The explosion possibly was the oxygen tank. 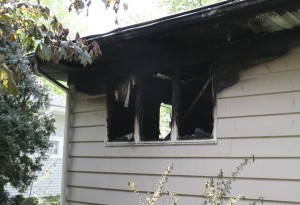 The fire at 270 High St. in Emmons began in this upstairs bedroom.

Fire investigator Doug Johnson said he is not ruling out a cigarette as the cause. He is also considering an equipment failure.

“At this point I have eliminated arson,” Johnson said.

He said there were smoke alarms with batteries in the house, but when he talked to the family, they said they didn’t remember them going off. He noted there was no way to test if they were operable because they were destroyed.

In a closet in the middle of the house, about a dozen oxygen tanks were unharmed by the fire. Much of the walls on the main level are blackened, and in the basement level there is at least three inches of water. Thick smoke still lingers.

On Wednesday afternoon, the family was busy sorting through any of their salvaged belongings.

Meeks said they plan to stay three nights at a local motel — thanks to the Freeborn County chapter of the American Red Cross.

After that, however, they don’t know where they will go.

She said a friend is talking about organizing a benefit for the family, since they have lost almost everything. Details for the benefit had not yet been set up as of Wednesday afternoon.