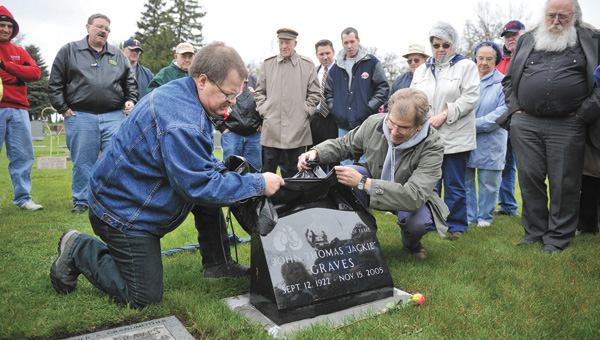 AUSTIN — It was another knockout for “The Austin Atom.” Friends and family of John Thomas “Jackie” Graves gathered at Oakwood Cemetery at 11 a.m. Saturday to honor the Minnesota Boxing Hall of Famer — who was in an unmarked grave — with a new tombstone.

“Jackie’s always been an icon for the city of Austin,” Mayor Tom Stiehm said.

“That’s just beautiful,” one woman said when she saw the stone.

Graves, who was raised on Austin’s east side, began his boxing career in the old Shaw Gym and went on to become one of the most decorated amateur fighters in history.

At the time, he was considered one of the top 10 boxers in the world and was the second-ranked featherweight boxer behind Willie Pep in 1946.

Graves lived in Austin nearly all his life, and died Nov. 15, 2005, at Good Samaritan Society in Albert Lea. He was buried a few days later in Oakwood Cemetery.

But because of miscommunication and a lack of money, the man who purchased a plot and headstones for many in his immediate family was lying in an unmarked grave.

That all changed Saturday when Graves’ new black headstone was unveiled.

“It’s a shame we didn’t have something until now,” Stiehm said.

Without a grave marker, Stiehm and others called for donations to raise the funds to honor Graves.

One of the first people to call for a grave marker was Jake Wegner, president of the Minnesota Boxing Hall of Fame.

Wegner met Graves when he was writing an article on the boxer, and the two quickly became friends. Wegner frequently visited Graves, and after his death came to Austin to see his grave. But Wegner was unable to find the grave because it wasn’t marked.

Wegner described Graves as a giving man. One story Wegner shared was that Graves gave one of his sisters a $100 bill when she asked for money to buy a candy bar.

Graves had a knack for making people feel comfortable and letting them get close to him, Wegner said. This was a skill he utilized in the ring in leading up to a knockout.

“He was one of the all-time greats — not just in Minnesota,” Wegner said.

Gene Novak, another person who pushed to get Graves a marker, described the boxer as a person who always stayed true to his roots and friends on Austin’s east side.

Novak told the story of being part of a boxing club with Graves. But even when Graves went on to be a boxing star, Novak said he always had time for the people of Austin.

“Jackie Graves had a big heart, and was always good to everybody,” Novak said.

Mullenbach was the second youngest and is the only surviving member of the 14 Graves children. She was 15 years younger than Graves, and described her brother as someone who was always good to others.

Even though she recalled seeing her brother many times through the years at family picnics, she said she only saw him box once.

“He knocked the guy out in the first round and that was it,” she said.

— Adam Harringa contributed to this report.