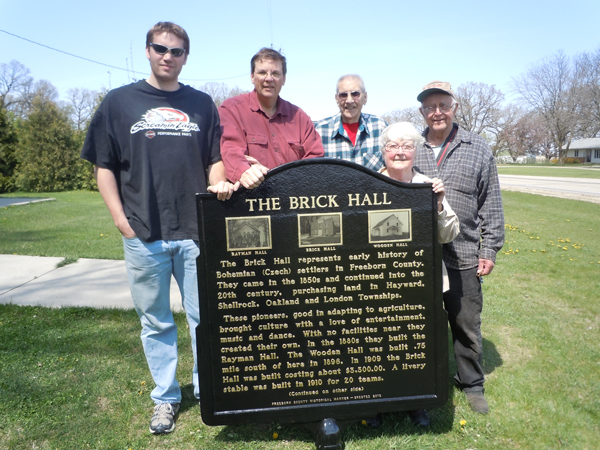 When volunteers showed up at the Brick Hall north of Myrtle for the annual spring cleaning, they got a treat. On the table inside was a marble cake decorated with a picture of the Brick Hall, and outside they participated in the unveiling and dedication of a new historical marker, with history of the Bohemian settlement of the area and the Brick Hall. The marker project was financed with funds provided by the state of Minnesota from the Arts and Cultural Heritage Fund through the Minnesota Historical Society. It was sponsored by the Freeborn County Board of Commissioners, Dan Belshan, chairman and grant writer, and the project director was Alton Krikava.

Sewah Studios of Marietta, Ohio, won the low bid for the marker project at $2,830, nearly what it cost to build the Hall originally. Sewah had done many of the state of Minnesota markers, and suggested this marker be painted in those same colors, black background with gold-colored lettering. Labor and materials to mount the pole were donated.

The marker has three pictures, the Rayman Hall, the Wooden Hall and the Brick Hall. Milo Belshan did the historical research and text, which reads:

“The Brick Hall represents early history of Bohemian (Czech) settlers in Freeborn County. They came in the 1850s and continued into the 20th century, purchasing land in Hayward, Shellrock, Oakland and London Townships.

These pioneers, good in adapting to agriculture, brought culture with a love of entertainment, music and dance. With no facilities near they created their own. In the 1880s they built the Rayman Hall. The Wooden Hall was built .75 mile south of here in 1896. In 1909 the Brick Hall was built costing about $3,300. A livery stable was built in 1910 for 20 teams.”

The text continues on the back side: “In 1985, the Brick Hall was placed on the National Register of Historic Places. Zara Zapadu (Glow of the West) Lodge No. 44 was part of ZCBJ fraternal life insurance association (later WFLA).

During the 20th century this Hall served as a recreation and meeting center, and has hosted many celebrations highlighted by July Fourth activities including parades, plus many dances, dramas and even funerals. Many well-known traveling and local dance bands graced the Brick Hall stage.

As of this date Lodge No. 44 is still active, and the Brick Hall still functions for lodge meetings, tours, reunions, occasional weddings and community activities, including an annual dinner following the Memorial Day service at the Bohemian National Cemetery located .5 mile north of here.