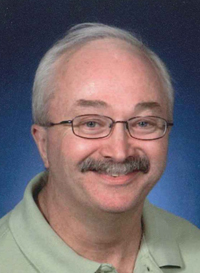 Funeral services will be at 11 a.m. Saturday at Salem Lutheran Church, with the Rev. Bill Peters and the Rev. Randy Baldwin officiating.

Doug Edwin Zobel was born Oct. 4, 1956, in a car east of Forest City, Iowa, to Bing and Betty (Peterson) Zobel. He was confirmed at Bethany Lutheran, Joice, Iowa. He graduated in 1975 from Lake Mills Community School, Lake Mills, Iowa, where he was active in high school wrestling. He married Vickie Thompson on Aug. 4, 1979, at Silver Lake Lutheran Church. He began work at Dielectric in 1979 employed there until his death.

Doug loved his wife and three children and anything that included them. He was passionate about baseball, fishing, ice fishing, bonfires, Green Bay Packers, Minnesota Twins and life. If something was broke, he could fix it. Inventing stuff was his hobby. He could frequently be seen on his “hog,” a 1982 Honda Express Moped, tooling around Lake Mills. There wasn’t a person who walked past Doug that he didn’t engage into a conversation. His Christmas lists frequently included WD40 and duct tape.

Doug will be sadly missed by his wife, Vickie; his children: Brandon and fiancé, Blair Diers, of Omaha, Neb., April Zobel of Kansas City, Mo., and Nolan Zobel, soon to be from Lincoln, Neb. He is survived by his siblings: Ray and Elaine Zobel of Custer, S.D., Pat and George Schammel of Redwing and Paul and Connie Zobel of State Center, Iowa; his father-in-law, Ernest Thompson of Emmons; sister-in-laws: Debra and Bill Georgia of Lake Mills, Iowa, and Barbara Thompson of Lake Mills; and brother-in-law, Donald Thompson of Emmons; his uncle and aunts: Lois and Floyd Zobel of Lincoln and Jeanette Zobel of Minnesota; his nieces and nephews; numerous cousins, friends and family.

He was preceded in death by his mother and father, Bing (Leslie) and Betty Zobel; his mother-in-law, Dorothy Thompson; his sister Luann Money; and grandparents.