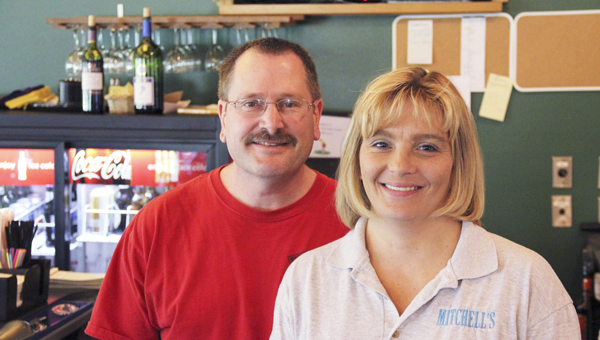 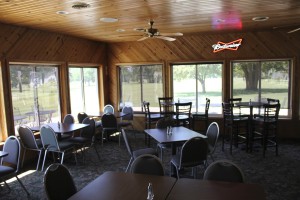 Customers at Mitchell’s can watch golfers as they enjoy their meals. -- Tim Engstrom/Albert Lea Tribune

What was once called Turnberry’s is now called Mitchell’s. The new owners, Jeff and Denise Mitchell, have extended the open hours, brought a more casual atmosphere and a wider selection of food.

But it hasn’t been easy. The pair already own Mitchell’s Bar & Grill in Leland. Signing a lease with the Rice Lake Golf Course meant they had to run two places. The last day they had off from work was March 28.

“It’s a juggling act here trying to give both places equal amount of time,” said Denise.

Jeff said customers like to see the owners at local eateries, making them set apart from chain restaurants.

The two began operations at the Rice Lake Golf Course on April 1. They have owned Mitchell’s Bar & Grill for 3 1/2 years.

The Mitchells also have five children. All but four are grown. The youngest is in high school in Forest City, Iowa, where they reside.

Denise grew up in Lake Mills and worked at the golf course when she was a teenager. The course and the restaurant have been busy this spring with the warm weather. Still, it’s not busier than the place in Leland.

They do, however, end up working large crowds, such as banquets, weddings and parties. 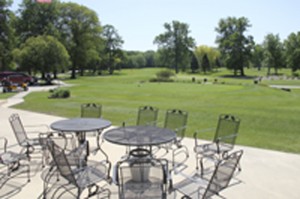 Customers at Mitchell’s frequently sit outside and enjoy the view.

In general, Jeff runs the kitchen and Denise handles the bar and dining room, along with scheduling workers. They can trade roles from time to time, but they said their ability to work together has benefitted them over their 16 years of marriage.

He said his family thought they were crazy for expanding, “but so far, golfers like it.”

Jeff said their most popular menu item in Leland is the chicken and ribs. They have brought that to the menu at Rice Lake.

Other popular items are sandwiches. They offer what’s called the Motz Burger, shredded steak on a bun smothered in cheese. The Brunch Burger features a patty, hash browns, egg and cheese all on toast.

But the signature burger at Mitchell’s at the Rice Lake location is the Hole in One. The menu says: “8-ounce tenderloin, hamburger, bacon, sautéed onions and mushrooms, onion rings, with chipotle dressing.”

The menu includes appetizers, wraps and salads, in addition to dinners such as a 12-ounce ribeye.

The biggest challenge, Jeff said, is always dinner. People want to eat between 5 and 7 p.m., and he added the biggest reward, though, is the thanks people give when they liked the food and service.