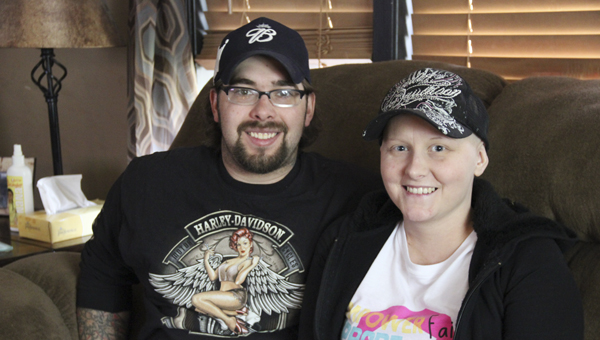 Tyler Baas and Heather Larsen sit on their comfortable couch Tuesday in their home on St. John Avenue. Larsen, 31, got a second medical opinion on what was thought to be a cyst and found out it was breast cancer.

She scratched an itch last July and felt a lump on her right breast. 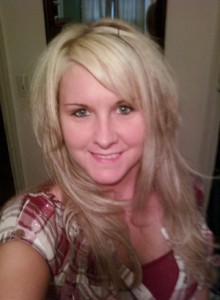 Heather Larsen had long hair before she found she had breast cancer.

Albert Lea hairstylist Heather Larsen had it examined. She had a mammogram and an ultrasound, and the ultrasound expert told her the lump was just a benign cyst and nothing to worry about. They normally appear as people age, and Larsen was only 30.

She was to have it removed, but the surgery department rescheduled her twice. The last time she didn’t follow up because, well, she thought it was benign. She had missed too much work already.

“I was told it was not cancer, so I thought it could wait,” Larsen said.

Four months after that itch, a woman she had never met before walked into the salon. During the haircut, the woman mentioned that her only daughter had died from breast cancer. She said she had been told she had a cyst, but it turned out to be a cancerous tumor.

“That lady scared me, so I called right after she left to make appointment,” Larsen said.

When she arrived at the hospital, the surgeon asked why she was there.

“I said, ‘To remove my cyst.’ And he said, ‘Don’t jump ahead. I can leave it, and they sometimes go away on their own.’”

He offered to drain it with a needle, and she took that option. The surgeon found he could get nothing from the needle. It was solid. He told her to come back the next day to have it removed. 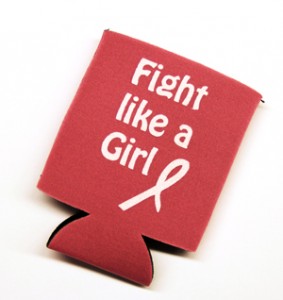 The surgery was more than she imagined it would be: “I could feel how deep he was in there and the smell of burnt flesh. I shook the whole time.”

He showed her the tissue and said he would send it to the lab to make sure it wasn’t cancer. Two days later, the surgeon called her.

“I was not expecting it. I told the doctor: ‘You’re joking, right?’” she said.

She went in the back and sat down and then cried. Her mom, a hairstylist who owns Mary L Hair & Body Care at 338 S. Broadway Ave. in Albert Lea, advised her to cancel her appointments and go home. Instead, she pulled it together and worked the day, wanting to keep her mind off the subject.

Larsen and her family received that news in November, and it has changed their lives.

“Now I appreciate everything 10 times more,” she said.

Most summers, the extent of camping she does depends on budget constraints. She lives with her fiancé, Tyler Baas, 27, on St. John Avenue in Albert Lea. They plan to camp as much as possible this year and like to go to Jellystone Park 10 miles east of Austin.

She has two children: Brandon, 13, and Makayla, 6. She tells them more often that she loves them and gives them kind words of encouragement more often, as well.

When Brandon was told, he associated the word cancer with death and cried. Makayla told him not to cry. She was upset later, though, when Mommy’s long hair had to be cut off. Now they understand Mom is sick but can get better.

And the wedding between Larsen and Baas was to be this July; it has been postponed. 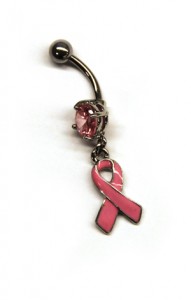 Her close relationship with her mother, Mary Samudio, has taken a twist, too. Normally, the mother is the strong one and the daughter is emotional. But the mom has done most of the weeping.

Samudio said, “She kept asking the doctor, ‘How come I did the all the crying and she didn’t cry?’”

Mary, who has the character trait of being protective, is angry because the cancer wasn’t detected sooner, because her daughter was told it was benign, because cancer is beyond her control. She wishes a second opinion or a specialist was brought in sooner. She loves her children and doesn’t want to lose her daughter.

Larsen’s father, Rocky Larsen, had been somewhat distant. That has changed. Instead of waiting to be contacted, he does the contacting. He has taken a greater interest in his daughter.

Like many families, they are blended, so follow closely: Baas has an 8-year-old daughter, Madalynn. Rocky Larsen is Samudio’s ex-husband. They also have a son, 28-year-old Travis Larsen. Samudio is married to Matt Samudio, a software programmer for UnitedHealth Group. The Samudios also reside in Albert Lea. And Matt’s father, who resides in Missouri, was diagnosed with widespread cancer last year and is fighting it.

Heather Larsen at first was numb to the idea of having cancer. Now she maintains a hopeful outlook.

“Once I’m done, someday I will look back and say, ‘Omigod, I had cancer!” she said.

After learning she had cancer, Larsen traveled frequently to the Mayo Clinic in Rochester for extensive tests. She was diagnosed with aggressive triple negative breast cancer. On Dec. 22, she had a bilateral mastectomy.

Breast cancer is not merely one disease. There are many forms of it, and one is called triple negative, usually assumed to be the most aggressive kind and most difficult to treat. While chemo is effective, triple negative doesn’t respond to hormone treatments or other receptor-targeted treatments. It even has its own foundation — Triple Negative Breast Cancer Foundation.

Her final day of chemotherapy is Monday. After that, she begins a tough wait. She will attend checkups to find whether the treatment worked.

The surgery alone had an $80,000 price tag. Larsen has health insurance, and it has paid “a large chunk” of the costs. But there remains much debt. A benefit to help offset medical expenses is slated to happen Saturday.

Larsen has a big support group behind her. Big refers to the Albert Lea Grizzlies football team. The players will wear pink for her at their home opener against the South Central Hawgs at 6 p.m. Saturday at Southwest Middle School. Pink is the color of breast cancer ribbons. Family members are selling pink things for Fight Lke a Girl — T-shirts, koozies, jewelry, hair extensions, Jell-O shots, cookies, you name it.

Her story also is detailed at www.facebook.com/heathersbreastcancerjourney. Readers can follow her struggle with chemotherapy and the good days when she feels better, along with comments about losing eyebrows and sore throats. And people can donate to the cause.

Larsen has a list of things she would like to do but never has done. She has never been out of the Midwest, except a trip to Colorado when she was a child. She has never left the United States. She has never seen the ocean. She hasn’t even seen the Black Hills of South Dakota. She wants to go to Mexico.

“I’m not worried about the long term right now,” she said.

No doubt, she would like to worry about that again someday.