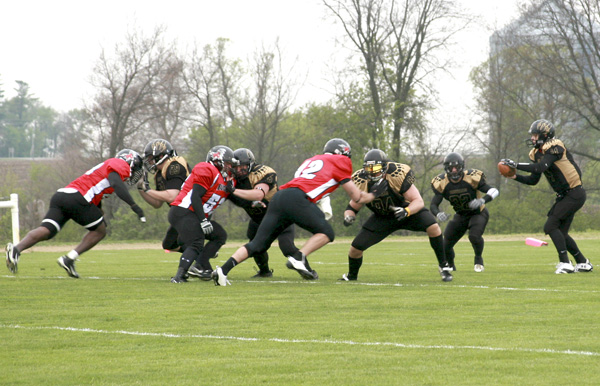 The Grizzlies played the North Iowa Bucks in the first game of the season on April 28. They will play at home on Saturday. -- Submitted

The Albert Lea Grizzlies kicked off their 2012 season with a win over the much-improved North Iowa Bucks April 28 in Rockwell, Iowa. In the three previous meetings between these teams, the Grizzlies had topped the Bucks each time with scores of 60-6, 48-18 and 48-16.

Both teams looked a little rusty in their first game of the season, but the Grizzlies put up the first points of the game in the first quarter with a pass from quarterback Paul Ciochetto to wide reciever Tony Tolbers. The two-point conversion attempt failed and the Grizzlies led 6-0. Both defenses showed their strengths as neither team was able to put together a scoring drive in the second and third quarters.

In the fourth quarter the Bucks put together a scoring drive capped by a pass from quarterback Greg Falls to running back Travis Campbell, and made the score 6-6. The two-point conversion attempt failed. Toward the end of the fourth quarter both teams moved the ball in hurry-up formations, but neither was able to score points and at the end of regulation the score was tied at 6-6.

The Grizzlies won the toss in overtime and elected to take the ball. Ciochetto threw a touchdown pass to wide reciever Jason Kuipers in the corner of the endzone making the score 12-6. The two-point conversion attempt was unsuccessful. The Bucks then took over and scored a touchdown with a pass from Falls to wide reciever Marquis Shaw. The Bucks lined up to kick the extra point and finish the game, but Grizzlies’ defensemen Mikey Salinas and Chris Hable managed to penetrate the Bucks offensive line, and Mikey Salinas blocked the kick. The tie after both teams’ drives resulted in another overtime scenario.

In the second overtime, the Bucks got the first chance to score on offense, and after a few plays, Falls managed to cross the goal line on a quarterback sneak putting the Bucks in the lead 18-12. Once again the two-point conversion attempt failed. The Grizzlies came out to try to match the Bucks score and succeeded with a running play by Kuipers. The Grizzlies lined up and Kuipers kicked the extra point to end the game with a score of 19-18 at the end of two overtimes.

The Albert Lea Grizzlies’ next game is their home opener against the rival South Central Hawgs from the Fairmont area in a rematch of last season’s league championship game. The Grizzlies take on the Hawgs Saturday with kickoff scheduled for 5:30 p.m. The Grizzlies’ home games are played at Southwest Middle School and admission is free to all.

The Grizzlies will dedicate the game to Heather Larsen and are collecting donations during the game to benefit her fight against cancer. The dedication and donations are in conjunction with the benefit activities planned for Saturday at the Eagles and Aragon Bar.