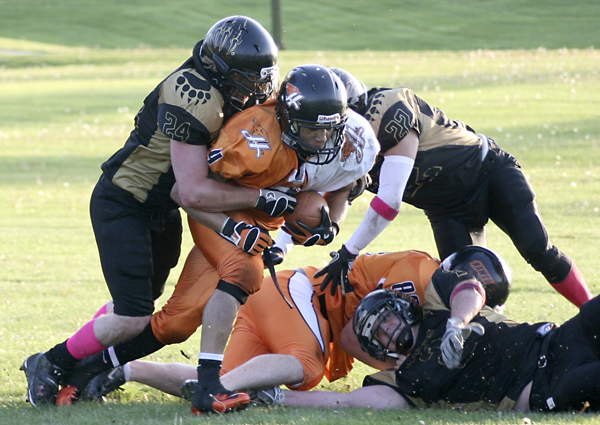 The Grizzlies came up short Saturday at their home opener at Southwest Middle School in a hard-fought battle against the rival South Central Hawgs.

The Grizzlies faced the South Central Hawgs on Saturday at Southwest Middle School. The Grizzlies wore pink to honor Heather Larsen and her fight against cancer.

While most of the weekend was rainy, it didn’t affect the football game.

The field drained, and aside from a small lake in the fan area, the grass was fairly dry.

The Hawgs scored first midway through the first quarter but shanked the extra point try, making the score 0-6.

Early in the second quarter the Grizzlies answered, driving down the field and scoring on a fullback dive by Mikey Salinas. Jason Kuipers kicked the extra point, and the Grizzlies led 7-6.

The lead was short-lived as Jerry Heidelberg of the Hawgs returned the ensuing kickoff for a touchdown, followed by a successful 2-point conversion, making the score 14-7, in favor of the Hawgs.

In the remainder of the second and all of the third quarter neither team scored. The Grizzlies had two nice drives that ended prematurely with turnovers, and the Hawgs missed a field goal from inside the 20.

The Hawgs increased their lead in the fourth quarter with a field goal making the score 17-7.

The Grizzlies came out with their no-huddle offense and drove the ball to midfield before turning the ball over on downs late in the fourth quarter. In the closing seconds of the game the Hawgs broke away and scored another touchdown and extra point to finish the game 24-7.

“Both teams fought hard, but in the end we just came up short,” Grizzlies coach Steve Piper said. “We left points on the field, and in the end it cost us the game.”

The Grizzlies (1-1) travel to Cleveland to face Minnesota River Valley Shock (0-2) this weekend. Kickoff is scheduled for 4 p.m. Saturday.

The Grizzlies dedicated their home opener to supporting Heather Larsen’s battle against breast cancer. Most of the players sported some pink in their uniforms from socks to armbands to tape. The team was enthusiastic about supporting Larsen.

They distributed pink “Grizzlies 4 Heather” wristbands at the game to anyone who donated to the benefit.

The team also sold Team Heather/Fight Like a Girl can koozies to raise funds.

The total of the donations collected from players and fans was $185, and the Grizzlies contributed another $250 to make the total $435.

The donation was presented to Larsen at the fundraiser at Aragon Bar following the game, along with a football autographed by the entire team.

The Grizzlies would like to thank everyone who helped make it a successful endeavor.