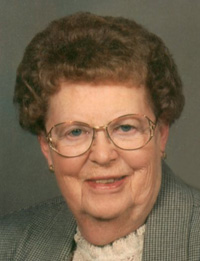 She was born May 30, 1922, in Linville, Iowa, to Charles and Dea Collins. She was the oldest of four children. Helen graduated from Albert Lea High School in Albert Lea and Mankato Business College in Mankato.

Helen worked in Albert Lea for American Gas, and was later swept off her feet by a handsome young farmer, Warren Ditlevson. They were married in Albert Lea in 1944, and resided in Myrtle for several years before purchasing a farm near Clarks Grove. They had a dairy farm and there they raised three daughters: Janalie, Donna and Sybil. Helen worked for FHA in Albert Lea for 25 years, while also working as secretary to the Clarks Grove Baptist Church, putting out the weekly bulletins. After retirement Helen worked as a bookkeeper for the Clarks Grove Veterinary Clinic. Helen and Warren sold the farm and moved to Fergus Falls in 2006 to be closer to their daughters.

Helen and Warren traveled and square danced in their retirement years which they enjoyed immensely. Helen loved to garden and grow flowers. She had a real green thumb.

Helen is survived by her husband, Warren of Fergus Falls; daughters: Janalie Lewis of Fergus Falls, Sybil Anderson of Fergus Falls and Donna Robinson of Show Low, Ariz.; four grandchildren: Kelly of St. Cloud, Kristy of Portland, Ore., Matt of Chandler, Ariz., and Nick of Mesa, Ariz.; a great-granddaughter, Emma of Mesa, Ariz.; two sisters: Polly, from Columbia, S.C., and Jeanne from Haymarket, Va.; and many other nieces and nephews.

Preceding her in death were her parents and a brother, Harold.

Memorial service will be at 2 p.m. Saturday at Olson Funeral Home in Fergus Falls with Chaplain Ken Austin officiating. Visitation is one hour prior to the service at the funeral home. Interment will be at Clarks Grove Baptist Cemetery, Clarks Grove. Olson Funeral Home in Fergus Falls is in charge of the arrangements. Condolences may be sent online at www.olsonfuneralhome.com.