Funeral services for Henry A. Johnson, 91, of Hartland, will be at 2 p.m. Tuesday at the Cross of Glory Lutheran Church in Hartland. The Rev. Dennis Frank will officiate. Interment will be in the Hartland Cemetery. Visitation will be one hour prior to the service at the church on Tuesday. Online condolences are welcome at www.bayviewfuneral.com. 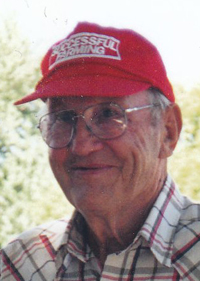 Henry died on Saturday, May 5, 2012, at the Country Neighbors in Mapleton.

Henry Alert Johnson was born on March 15, 1921, in Hartland, the son of John A. and Nellie A. (Young) Johnson. He was a lifelong farmer in the Hartland area. He went to country school there and was a member of the Cross of Glory Lutheran Church. Henry loved all things associated with farming. One of his favorite pastimes was driving around “checking the crops.” He also enjoyed black dogs and had several as pets, all named “Blackie.” Henry was a very devoted son and a wonderful brother and uncle.

Henry was preceded in death by his parents; his sister Marie Esse; and brothers: Edwin and James Johnson.

In lieu of flowers, memorials are suggested to the Mayo Clinic Hospice or to Country Neighbors, 206 3rd Ave. NE, Mapleton, MN 56065.