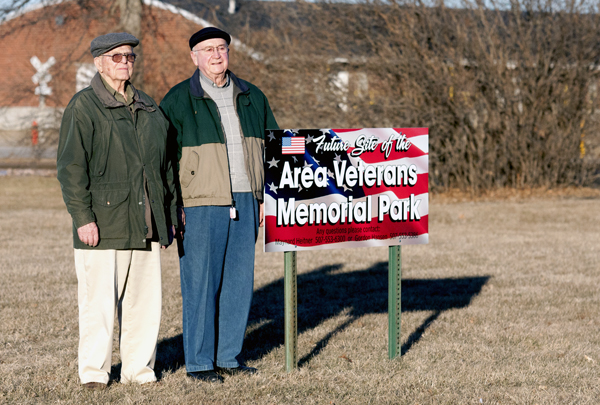 Gordon Hansen, left, and Maynard Heitner hope to start building a veterans memorial on a lot in Wells in the fall. The two started planning the project in the summer of 2010. — Brandi Hagen

In May of 2010, two longtime friends attended a Memorial Day service at a cemetery.

Gordon Hansen, now 89 years old, and Maynard Heitner, 85, felt as though the memorial, not the service itself, was inadequate for those who have served in the military.

Over coffee, which happens several times a week between the two, Hansen and Heitner decided they wanted to erect in Wells their own veterans’ memorial for veterans in eastern Faribault County and western Freeborn County.

When built, the memorial will honor veterans of all wars for the communites of Alden, Bricelyn, Easton, Delavan, Freeborn, Kiester, Minnesota Lake, Walters and Wells.

Hansen, a Navy veteran and retired superintendent from the Wells school district, and Heitner, a retired funeral director from Wells, thought rather than sharing the idea to get some other folks to head the project they might as well start on the work themselves.

To figure out what they should be doing, the two traveled within a 75-mile radius of Wells, visiting other memorials.

The most impressive one they found was at Arlington Park in Lake Mills, Iowa. So, they started drawing up plans with similar features.

With estimates of at least $200,000, Hansen and Heitner looked to donations from individuals, businesses and organizations to help with the construction.

Where others may make cuts to save on cost, the two men don’t believe in doing so.

“We have to do a top-quality job or not do it at all,” Hansen said.

The details for the project have been figured out for quite some time. It is hoped that construction can start in the fall. The memorial will be placed on a lot in downtown Wells, a location central to other towns that will be included.

A circular concrete base will be poured with a U.S. flag flying in the center. Placed on the concrete will be four black granite walls, which will hold an estimated 300 names per side. The men chose granite because it weathers better than brick would.

Planning for the future, Heitner and Hansen are going to have extra foundations poured so when the four walls are full of names, additional ones can be placed where they want them, even if they aren’t around to supervise.

There will be three entrances to the park with statues of infantrymen placed at each. A gazebo and benches will also be added to allow people time to reflect or meet as groups.

With just about everything planned, the only thing left to do before the construction process can begin is collect the rest of the necessary finances.

The men hope people understand that as donations are collected for the memorial, “it’s not an obligation, it’s an opportunity.”

Going into the project, Hansen said they had no idea that it would take as much time as it has.

Heitner said he has kept a log of how much time they have spent planning the memorial and without counting the coffee dates that turned into planning, the men have had more than 50 formal meetings thus far.

Even though they have spent a great amount of time in the past year and a half planning, they aren’t in it for the personal glory.

“We just think it’s something that ought to be done,” said Hansen.

“If somebody says, well who started this and someone else says, I don’t know, that’s OK by us,” Heitner said.