The memorial service for John “Jack” Edmund Lambert of Albert Lea will be at 2:30 p.m. Friday at St. Theodore Catholic Church. The Rev. Timothy Reker and Deacon Mike Ellis will officiate. Interment will be in Hillcrest Cemetery. Visitation will be from 4 to 7 p.m. Thursday at Bonnerup Funeral Service, Albert Lea, and one hour before the service at the church. 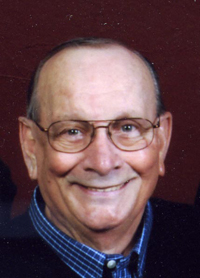 He was born John Edmund Lambert on Sept. 19, 1935, in Mason City, Iowa, the son of Earl and Elizabeth (Swanson) Lambert.

He graduated from St. Joseph’s High School in Mason City, Iowa, in 1955.

Jack had worked for Piggly Wiggly in Mason City, Iowa, as a meat cutter until he was transferred to the Albert Lea store in 1966. He later worked for Hy-Vee, from which he retired in 1998 after 19 years of employment.

He enjoyed watching the Twins and the Vikings. He was an avid golfer and very proud of his hole-in-one, which he obtained at the age of 72.

His greatest enjoyment came from spending time with family and following his grandchildren’s activities.

Jack is survived by wife Julie of Albert Lea; two children and their families: Brian Lambert and his wife, Lisa, and their children Shea and Shad of Medford and Ann- Marie and her husband, Jeremy Knutson, and their children Carsen and Kendra of Glenville; sisters: Jean Dombrowski of Mason City, Iowa, Mary Jane Coe of Littleton, Colo., Patricia Dempsey of Mason City, Iowa, sister-in-law Janice (David) Humphrey of Aledo, Texas and numerous nieces and nephews.