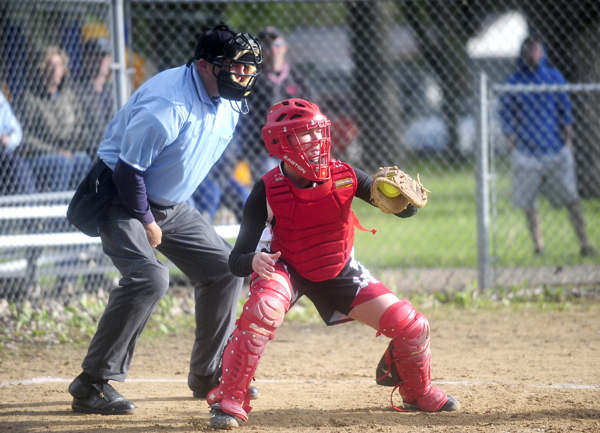 ALDEN — Despite muddy fields and the occasional sprinkling, both the Alden-Conger softball and baseball teams were off to a good start on Tuesday during their home games, but in the final innings both fell short. 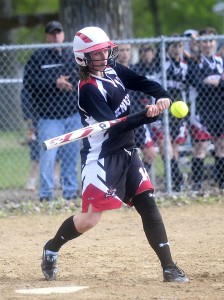 An Alden-Conger player swings at a ball on Tuesday against Martin County West.

The softball team lost to Martin County West 4-3 in the eighth inning.

“We played an errorless game,” Knights coach Gary Nelson said. “They just hit the ball where we weren’t.”

The Knights had the lead for most of the game, but it was taken away in the sixth after a lead off triple by the Mavericks’ Becca Stene.

“I told the girls they played well and they deserved to win, they just didn’t get the breaks the other team got,” Nelson said.

The softball team will play at St. Clair at 5 p.m. Thursday.

Over on the baseball field, the Knights lost to St. Clair 7-1. 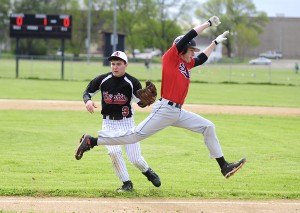 Knights pitcher Jordan Johnson grabs a ball hit to him and tags St. Clair’s Joe Bruels on his way to first base.

Alden-Conger’s Tony Behnke scored the first and only run in the bottom of the first for the Knights. They trailed closely 4-1 until the top of the seventh when the Cyclones scored three more runs.

“It was just one of those innings,” Knights coach Sam Hintz said. “We had two pretty big errors and missed some groundballs up the middle that really hurt.”

The Knights baseball team will play their next game 5 p.m. Thursday at Martin Luther-Granada-Huntley-East Chain-Truman. 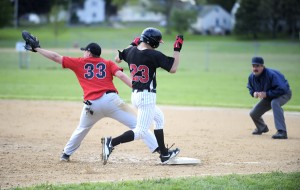 Alden-Conger's Deion Skinner touches first base before St. Clair's Dan Phelps could catch a throw to tag him out. — Brandi Hagen/Albert Lea Tribune