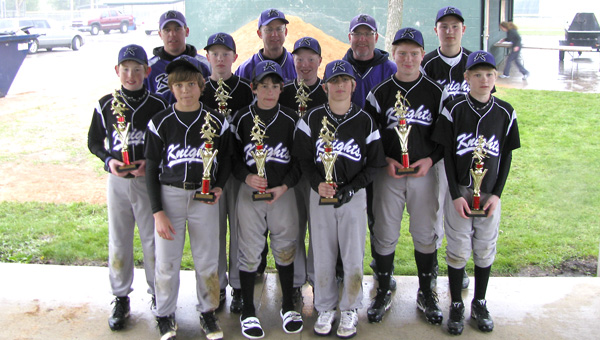 The Albert Lea Knights baseball team kicked off its 2012 tournament season by winning the Hardee’s Classic in Mason City on April 28 and April 29.

To win, they first defeated Central Springs 12-0. Then they beat West Fork 9-0. In the final game before the championship, the Knights beat Mason City Newman 13-0.

They advanced to the championship game to take on River City. The Knights beat the Rebels 9-2.

The next time the Knights play is at an invitational in Eden Prairie May 11 to May 13.

To help with their season, Vern Eide Chevrolet has partnered with the team. 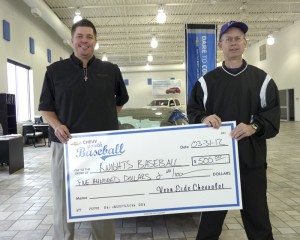 Vern Eide Chevrolet has joined forces with the national Chevrolet Youth Baseball program to provide new equipment, a monetary donation and an opportunity to raise an additional $10,000 through a vehicle sweepstakes. The program kicked off March 1 and runs through July 15.

“There is nothing more American than Chevrolet and baseball. Vern Eide Chevrolet wants to combine America’s favorite brand and favorite pastime together for our families in Albert Lea to enjoy,” added Richter.

The Chevrolet Youth Baseball program is beginning its seventh year, and has helped raise more than $13 million to aid local teams, affecting more than 2.7 million young people in communities where Chevrolet’s customers live, work and play. This year, about 1,600 Chevrolet dealers are participating.

Vern Eide Chevrolet presented the Albert Lea Knights Baseball with 10 new equipment kits complete with equipment bags, baseball buckets, whiffle balls, hitting net, batting tees and Chevrolet Youth Baseball T-shirts. In addition, Vern Eide Chevrolet presented a one-time monetary donation to Albert Lea Knights Baseball. The team will have an opportunity to raise additional funds through a Chevrolet Youth Baseball Fundraiser. Sponsored leagues across the country will each receive 2,000 fundraiser entry tickets to distribute for a suggested donation, and each league will keep 100 percent of the proceeds it raises. At the end of the fundraiser, five winners, one from each region, will win the Chevrolet Equinox or Chevrolet Cruze vehicle of their choice. Each participating market will award a secondary prize of a television and Blu-Ray player.