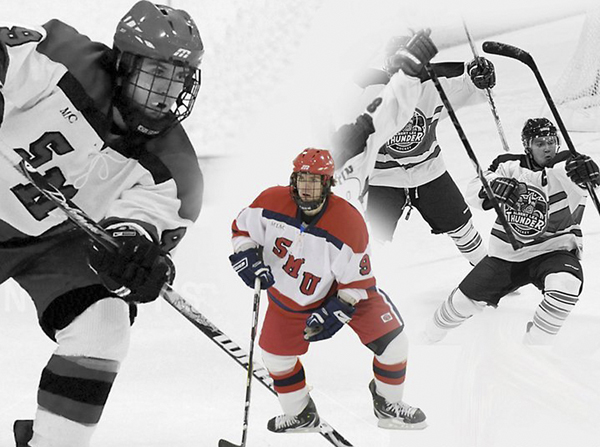 Danny Wood, a 23-year-old hockey player was on the Albert Lea Thunder team and St. Mary’s University team over the last five years. Wood will play on an elite league in Sheffield, England, starting this summer. -- Submitted

As one door closes, another opens.

Danny Wood, a former Albert Lea Thunder hockey player, is finding that saying to be all too true.

In August, the 23-year-old will travel to Sheffield, England, to play on their professional hockey team, the Sheffield Steelers. The Steelers had a 43-13 record last season.

“It’s a pretty exciting thing,” Wood said. “There’s a lot of expectations and playing in front of 4,000 to 5,000 people a night is going to be a fun experience. It’s going to be a challenge, but as a player you want to play in those pressure-type situations.”

Wood said he received a couple offers from teams in the Elite Ice Hockey League, but he didn’t really pay much attention because he had a personal connection to Sheffield.

From Faribault, Wood worked his way across Minnesota. He was first drafted in Albert Lea to play for the Thunder, an expansion team.

“It was a really neat experience,” Wood said. “Albert Lea is a hockey town, probably the biggest south of the cities in terms of kids that play and people that watch.”

Once the Thunder folded, Wood stuck around to coach a summer camp called Maximum Stride. The program has been a success for the last two years and Wood said despite his leave, there will be another in September.

Wood said because there is no ice at the Albert Lea City Arena this summer due to maintenance, the camp had to be pushed back to fall and he won’t be able to coach it, but other coaches he trusts will take his place.

“I’ll be back in the states next summer, hopefully with more experience and new cutting edge drills,” Wood said. “They’ll get their coach back with a little more experience. I’m going to miss them and miss watching their games, especially the in-house tournament.”

Wood said as of now he has signed a one-year contract with the Steelers.

“If I have a good season, then I’ll re-sign for another,” Wood said. “I’m not really putting any limitations on it. I’m just going to go there and concentrate on winning games and the championship. After the year, if I feel like pro-hockey isn’t something I’m going to do then I’m going to return to St. Mary’s University.”

Wood has been attending SMU in Winona for the last two years as a student and a member of the hockey team.

He is working toward a degree in biology pre-dental. He said while he is in England he will take a few classes online.

Wood said leaving school was the first thing he thought about when the opportunity came about.

“I’m a very good student so whether to sign or not and take the risk to leave school was hard for me to get my head around,” Wood said. “The window to play hockey though is so small, you can’t play forever.”

Wood’s parents, who moved to the states to reside in Ohio four years ago, have been supportive. He said at first they were concerned about the education aspect too, but they felt it was a good opportunity at this point in his life.

“My goal is to return to SMU because it’s a good science school,” Wood said. “They take pretty good care of me. It’s tough academically, but I definitely plan on going back there when I’m done playing.”

He said after the Thunder he felt he was on the path to just go to school and at play at SMU.

“I didn’t think pro-hockey was going to be an option anymore,” Wood said. “It’s amazing how one door closes and another opens. Hopefully I’ll look back without regrets and make the most of the opportunity I have.”