Louie Donald Mortenson Sr., 87, of New Richland, died Monday, April 30, 2012, at Mayo Clinic Health System in Albert Lea from complications of a stroke. A memorial service will be at 11 a.m. Saturday at St. Casimir Catholic Church in Wells. Visitation will begin at 9:30 a.m. at the church until the time of the service. The Rev. Thomas Niehaus will officiate and burial will take place in Rosehill Cemetery in Wells. Bruss-Heitner Funeral Home in Wells is in charge of the arrangements. 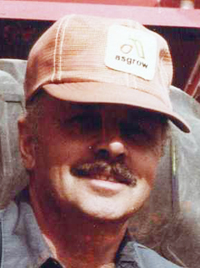 There are many words that we could use to describe our dad. The man was known as dad, father, farmer, brother, grandpa, great-grandpa, “sonny boy,” uncle, story teller, poet, singer, avid gardener, steward of the earth and friend. He lived his life with determination and dedication. He loved his life as a farmer and passed that trait to his daughters, sons, sons-in-law, granddaughters and grandsons. He was proud of his life and family.

Louie was born June 4, 1924, in Hartland Township to Louis and Agnes (Mucha) Mortenson. He married the love of his life and best friend, Marcelene Marcella Martin in Wells on June 27, 1948. They built a new home on their homesite where they resided. They were married for 62 years, when she preceded him in death on March 2, 2011.

He was preceded in death by his parents; his wife, Marcelene; and three sisters and their husbands: Hattie (Ingevold) Frandle, Audrey (Barney) LaRue and Leona (Herman) Olson.

Our lives have truly been blessed having him. He will be sorely missed. Blessed be his memory.