The funeral service for Mildred “Millie” H. Knudson of Albert Lea will be at 10:30 a.m. Wednesday at Salem Lutheran Church. The Rev. Mark Niethammer will officiate. Interment will be in Graceland Cemetery. Visitation will be from 5 to 7 p.m. today at Bonnerup Funeral Service and one hour before the service at the church. 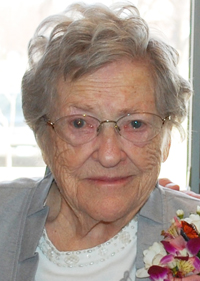 She was born on April 19, 1921, in Slayton, the daughter of Louis and Lula (Powell) Quaintance. Millie graduated from Slayton High School. During her high school years she worked at the local bakery and earned the nickname “Donut.”

Mildred married Elroy “Ole” Knudson on Feb. 3, 1946, in Westbrook. They lived in Slayton, Wayzata for a short time and then they made Albert Lea their home.

For a few years during the ‘70s Ole’s work moved them to Stewartville, later returning to Albert Lea. While in Albert Lea, Millie had worked at Coonradt’s Grocery, the Ford garage, and for more than 25 years for the Freeborn County Sheriff’s Department. She retired in 1983.

A member of Salem Lutheran Church since 1953, Millie had been active in “Sew and Tell,” Mary Magdalene Circle, Bible studies and served on several committees.

Millie loved baking cookies and will be especially remembered for her brownies and “famous” sugar cookies, made with love.

She was preceded in death by her parents, her husband, Ole, in 1987; brothers: Kenneth, Donald and Charles; and sisters: Viola Koob and Marie Johnson.