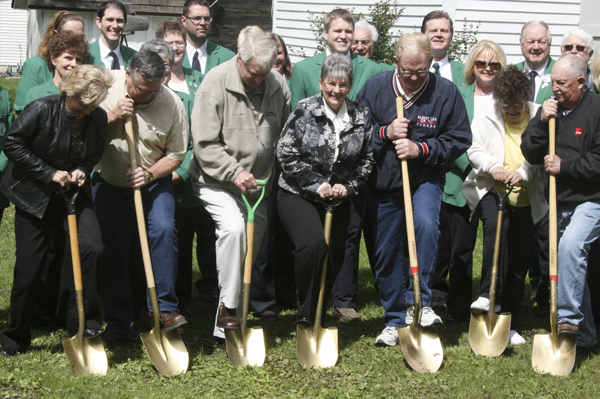 Freeborn County Historical Museum supporters and Albert Lea business leaders attempt to break the ground Wednesday during a ceremony for the museum’s expansion. About $1 million has been raised thus far for the expansion. -- Sarah Stultz/Albert Lea Tribune

After multiple years in the making, Freeborn County Historical Museum supporters on Wednesday broke ground for the museum’s more than $1 million expansion. 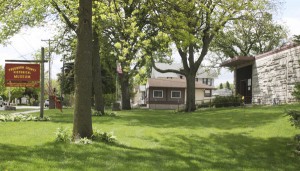 Plans for the expansion include a two-story, 10,000-square-foot addition, which would almost double the museum’s size.

“This is a really exciting day for us as we move forward with our building expansion project,” said Pat Mulso, executive director of the museum.

Mulso spoke during a short ceremony behind the museum while surrounded by board members of the Freeborn County Historical Society, city and county leaders, business leaders and Ambassadors from the Albert Lea-Freeborn County Chamber of Commerce.

Mulso said the project has been attempted three or four times over the last 20 years and she is happy to finally start seeing it move forward.

Once completed, the addition will house an expanded museum library, meeting rooms, a children’s learning lab, additional restrooms on both levels, an elevator, as well as a new entrance and reception area. 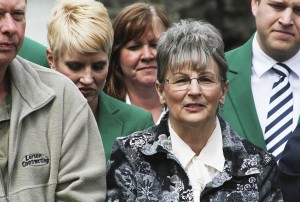 Pat Mulso, executive director of the Freeborn County Historical Museum, speaks at a groundbreaking ceremony Wednesday for the museum’s expansion.

“We hope as people start seeing those bricks going up they will donate,” she said.

“If everybody gives what they can, it will happen,” she said.

Bruce Olson, Freeborn County Historical Society president, said the museum is having to turn away items from the public because there isn’t enough room for them. The expansion will resolve that problem.

“It’s just an exciting time to be on the board,” Olson said. “We’re really looking forward to getting this project done and getting more room.”

Mulso said the museum contracted with an architect in 2009 and worked on the visioning for two years.

In 2011, the organization focused on fundraising.

Mulso said she hopes to have the building completed in about 180 days.

There will probably be two to three days at most where the museum will have to close.

For more information or to make a donation contact Mulso at 373-8003 or stop by the museum at 1031 Bridge Ave.