“Everything is nearly copacetic. I saw something unusual today. It wasn’t an optical illusion. It just looked like one. A car used its turn signal to let me know that it was switching lanes. Most folks are too lazy to do that. I just read a book of lazy facts. Lazy fact No. 1296744369884201853 is that people are too lazy to read the number of each lazy fact. I told the game warden that I was going deer hunting this year and that I didn’t need a license to do so. He got all worked up about it. He asked me why I thought I didn’t need a license. I had a good reason for not needing a new license. I’d be shooting at only the deer I missed while I had last year’s license. Pop was pulled over for speeding, but he didn’t get a ticket. The police officer asked Pop, ‘Do you know you were speeding?’ Pop replied that he was aware of the fact. The officer asked, ’Why were you in such a hurry?’”

“What did your father say?” I wonder aloud.

“Well, Pop smiled that crooked smile of his and told the policeman, ’I was in a hurry to get there before I forgot where I was going.’”

I spoke at the Horicon Marsh Bird Festival held in Wisconsin in May. I also led a birding trip for a busload of folks while I was there.

At more than 33,000 acres in size, Horicon Marsh is one of the largest freshwater marshes in the U.S. The marsh provides habitat for endangered species and is a critical rest stop for migrating waterfowl. 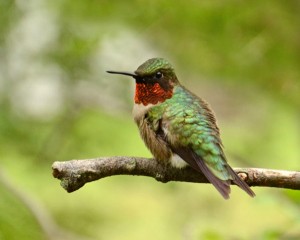 Darcy Sime of Alden took this photo of a ruby-throated hummingbird.

A marsh wren sang in the marsh — where else would it sing? It sounded like a sewing machine. Nearby, a common yellowthroat called, “witchety, witchety.” I watched a red-winged blackbird build a nest among the cattails.

Nature’s genius was evident as I observed a blue-gray gnatcatcher construct a nest. I marveled as it fashioned the structure out of lichens, spider webs and plant fibers.

A red-eyed vireo sang incessantly as if it suffered from obsessive compulsive disorder. A pair of barred owls landed near. They exchanged their signature “Who cooks for you? Who cooks for you all?” calls.

The wind funneled through the trees, producing sibilant sounds. A swallow became one with the wind. Horicon Marsh was a feather in my cap.

Ruth Searle of Waseca told me that she had watched Harris’s sparrows feed on dandelion seeds. One sparrow landed upon the stem of a dandelion flower, bending it low to the ground where the other sparrow could easily eat the seeds. It was tag team feeding.

The first bird that Noah released from the ark was a raven, not a dove. The raven is our largest songbird.

A kettle is a hollow in the ground formed when a block of ice left by a glacier melted. The largest kettle in North America is Fish Lake in the Cascade Mountains of Washington. The lake covers 550 acres.

Common buckthorn is the overwintering host of the soybean aphid. This pest spends the winter in the egg stage on common buckthorn and in the spring, aphids hatch and feed on buckthorn leaves.

Only 40 percent of robin nests successfully produce young and only 25 percent of the fledglings survive to November.

The stringy fibers found inside the skin of a banana are phloem bundles.

Fleabites are often around our ankles.

Chickadees, nuthatches and warblers foraging their way through forests have been shown to spur the growth of pine trees by as much as one-third, according to a University of Colorado study. The birds removed various species of beetles, caterpillars and aphids, increasing the vigor of the trees.

Killdeer incubate their eggs for 22 to 28 days.

“Do yellow jackets nest only in the ground?” Their nest can be hidden inside a dense bush, alongside a stump, buried in the ground with only a small, hard-to-see entrance hole, or located inside a wall or ceiling void of a building. Yellow jackets commonly build nests in rodent burrows.

“A flicker is hammering on the chimney cap of our house. Why is it doing that and how can I make it stop?” The flicker is using the cap as a sounding board to attract a female and to proclaim territory. If you could dull the sound by covering the cap with duct tape or cardboard, the flicker will stop. Flickers have a sticky tongue that extends two inches beyond their bill that helps them feed on ants. Nestling flickers produce a unique buzzing sound, an ability that lasts until they are nearly full-feathered. The nestlings make the sound whenever something approaches the nest cavity. Researchers speculate that the noise, which resembles a disturbed swarm of bees, might discourage squirrels and other nest predators.

“What is a land beaver?” It is a name that some people call a groundhog.

“What an astonishing thing a book is. It’s a flat object made from a tree with flexible parts on which are imprinted lots of funny dark squiggles. But one glance at it and you’re inside the mind of another person, maybe somebody dead for thousands of years. Across the millennia, an author is speaking clearly and silently inside your head, directly to you. Writing is perhaps the greatest of human inventions, binding together people who never knew each other, citizens of distant epochs. Books break the shackles of time. A book is proof that humans are capable of working magic.” — Carl Sagan