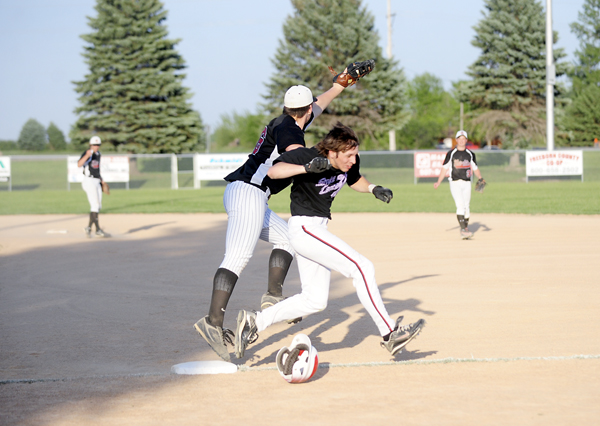 Panthers’ Lucas Meyer runs over first base before he could be tagged out on Thursday in New Richland. -- Brandi Hagen/Albert Lea Tribune

NEW RICHLAND — The New Richland-Hartland-Ellendale-Geneva baseball team flew to a 16-4 win over Alden-Conger on Thursday at home.

The Panthers scored seven of their runs in the first inning.

“That really helped,” Panthers coach Jeff Reese said. “It just set the tempo and it made it a little more comfortable.”

Alden-Conger scored a run in the third inning, but their other three runs were scored by getting walks with bases loaded in the fifth.

“I know Sam is trying to turn it around for them,” Reese said about Knights head coach Sam Hintz. “They’re playing better than last year.”

Throughout the game, the Panthers were getting updates about how the game between Waterville-Elysian-Morristown and Mankato Loyola was going.

Because WEM beat Mankato Loyola 18-8, the Panthers earned the title of conference champions for the season.