Local pastor Mark Miller has been in the youth ministry for 11 years. The last eight of those years have been at Calvary Baptist Church here in Albert Lea. Miller came to this church in September 2004. 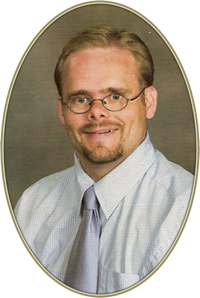 Prior to his coming to Calvary Baptist, he attended Riverland Community College of Albert Lea studying business management. The call of God upon his life to be in the ministry came to him shortly after he was saved. This led him to Moody Bible Institute where he took classes. Since his desire was to be in the youth ministry he enrolled in Tentmakers, an organization that equips those who want to be in ministry for young people. After his schooling in Tent Makers he was commissioned as youth pastor at a Lutheran church in Independence, Iowa, before coming back to his hometown.

Since his passion has always been preaching and teaching of the word of God he decided that he wanted to further his education in the ministry. With the support of the Calvary Baptist Church family, Mark enrolled in online classes at Baptist Bible College and Seminary in Clarks Summit, Pa. He received his bachelor’s and master’s degrees from the college and seminary on May 5.

A graduation open house was held in Miller’s honor on May 6 at Calvary Baptist Church.

Miller and his wife, Kelly, live in Albert Lea with their three children Caleb, Faith and Noah. Miller is the son of Duane Miller and Cheryl Hedman of Albert Lea and son-in-law of Bruce and Janet Himmerich. Grandparents are Vivian Miller, Floyd and Clarine Wallace, and Gary and Darlene Jordahl.