Progress: A man and his cave 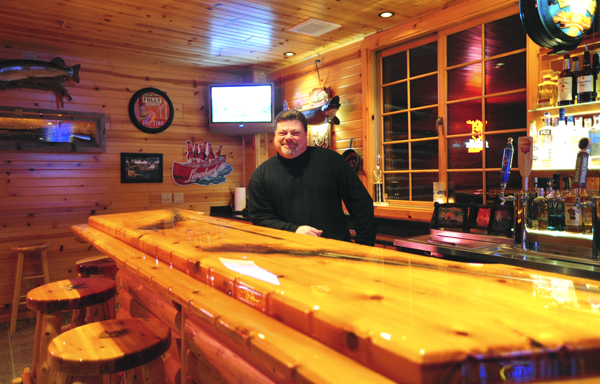 Mike Swalve leans on the bar in his home. Swalve designed and built his home in 2004 and made sure he had a bar with a lake view. — Brandi Hagen

Mike Swalve’s basement bar has the atmosphere that goes from zero to 100 at the snap of a finger. 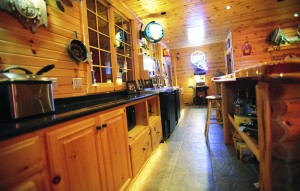 The kitchen portion of Mike Swalve’s man cave is complete with deep fryers, a pizza oven, four kegs on tap, a popcorn maker and a microwave.

When he built his home in 2004, he had plans to include a large bar area. Over a couple of years, he had exactly that.

He first decided he wanted his own bar when it was still legal to smoke in bars. He didn’t like the smoke and also didn’t like having to find a way home at the end of the night.

So he designed a walkout basement to include three bars; one inside with a view of Lake Chapeau and two outside on a 1,800-square-foot patio.

As a finishing and personal touch to the indoor bar, the company that built the bar, Ottertail Cedar Log Furniture, carved out the shape of two guns and placed guns that belonged to Swalve’s father below the resin finish. 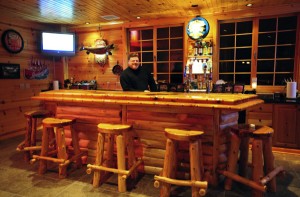 Mike Swalve is the accounts receivable manager and heavy truck warranty manager at Dave Syverson Truck Centers and works on custom cars and trucks on the side.

Another personal touch is that all of the woodworking in the man cave was done by Swalve’s friend, Joel Goette from Elgin.

The man cave is shared by Swalve’s fiancée, Dawn Freeman, and all of their friends.

He said he uses it as a place to entertain, not necessarily to be alone.

“My whole place out here is an escape,” Swalve said. “So I built it to entertain, not so I can get off work and sit and drink.”

Swalve said Freeman once hosted a purse party in the man cave.

“For whatever reason, purses on the patio didn’t work,” Swalve said. “The whole pool table was covered with purses. I took quite the beating from the guys on that one.”

He said he didn’t mind the purses one bit. 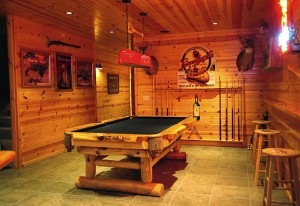 The log pool table in Mike Swalve’s man cave took six months. The pool table, the bar and the bar stools were all made by Ottertail Log Furniture out of Dent in Otter Tail County.

“I thought it was great,” Swalve said. “The girls had a good time and I bartended.

Swalve drew, designed and was the general contractor for his house, which took him more than two years to build.

For the past 12 years, Swalve has hosted a game feed, which now takes place in the man cave. Couples come to try new foods like salmon, pheasant potpies, venison and bear.

Swalve hosts another party about every other year, which has been named, “Swalve Gras.”

About 125 people are invited over for a feast and Swalve brings girls in to run the three bars.

Swalve said there are other events that aren’t so planned out. There are nights where someone will just show up with a bunch of guys and their wives.

“The best part is the spontaneous things,” Swalve said. “I like to show people a good time, I like good people and I like to have a good time.”

The man cave and the patio will host Swalve and Freeman’s wedding this summer.

They had considered a destination wedding, but instead decided their home on the lake was the perfect place.

“It’s beautiful out here,” Swalve said. “This is my favorite place in the whole wide world.”