Progress: Recover, restart and do even better 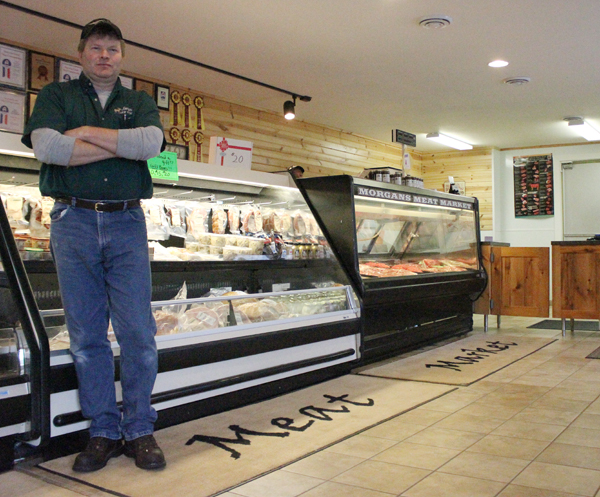 Dean Morgan, owner of Morgan’s Meat Market in New Richland, stands in the store’s new showroom. Morgan said the flooding in some ways turned out to be a blessing so that he could work on some of his business goals, including building a new showroom. — Kelli Lageson/Albert Lea Tribune

NEW RICHLAND — Dean Morgan remembers it well, the days before, during and after flooding shut down his business for about three months.

He recalls heavy rain, of a few inches, on Tuesday, Sept. 21, 2010. Then came Thursday, with about 11 inches of rain. He remembers water running through the streets but staying below the curb — until it jumped the curb and started seeping into Morgan’s Meat Market on Ash Avenue.

“It came up so fast,” Morgan said. “You know you try to keep your store clean and in a matter of eight hours it was all ruined.”

Now, almost a year and a half later, he thinks the flooding may have been a sort of blessing. It had always been a dream of his to change the store’s showroom, but it was one of those back-burner-type ideas.

“It threw us behind, but there were no lasting effects,” Morgan said.

After the flooding there was knee-high water in the building, and Morgan decided to completely overhaul the business. The retail area was closed for three months, and butchering was down for about a month. With the roof and much of the building damaged, Morgan got to start from scratch. The retail showroom was moved to another part of the building to expand the space and to allow the processing part to be more separate. He said he knew some people didn’t enjoy seeing the meat processing the way the business was set up before.

The New Richland Care Center was another badly-damaged building because of the flooding that September. About 50 residents were evacuated from the building to other cities in southern Minnesota.

Despite a massive sandbagging effort with more than 350 students, residents and emergency personnel volunteers, water seeped into the building. About four to six inches of water flooded through the entire building, causing damage to sheetrock, carpeting and heating and cooling units.

Administrator Mikenzi Hebel said the hardest part of the flooding was having to make residents go to other facilities.

“We have a support system here that others don’t have,” Hebel said. “The hardest part is they really are our family and they had to go start out new.”

During the three months the facility was closed sheet rock and carpeting were replaced. The facility also had to be disinfected and repainted. Hebel said air conditioning and heating units in residential rooms were replaced as well.

Some businesses were able to make claims with insurance, but since the area wasn’t considered a flood zone, most didn’t have insurance specifically for flooding. Pam Goehring, with the help of her husband, Larry, decided to do something to help those without insurance. They organized a New Richland Flood Relief Benefit that raised about $49,000.

“You can never underestimate the power of a community binding together to help each other,” Goehring said.

Thursday, Sept. 23, 2010: Twelve inches of rain fell and caused a drainage ditch that runs through New Richland to overflow. That ditch flows into Boot Creek two miles west of town, which empties into Le Sueur River three miles northwest of town. More than 125 homes were damaged and businesses shut down. Damages were estimated at $2 million.

Thursday, Sept. 30, 2010: Officials from the Federal Emergency Management Agency visited Freeborn County. Preliminary estimates showed there was about $189,708 in damages to infrastructure countywide. Estimates did not include damage to private homes.

Saturday, Sept. 24, 2011: The New Richland Care Center held a ceremony to mark the one-year anniversary of the flooding.