Father and daughter travel to Haiti 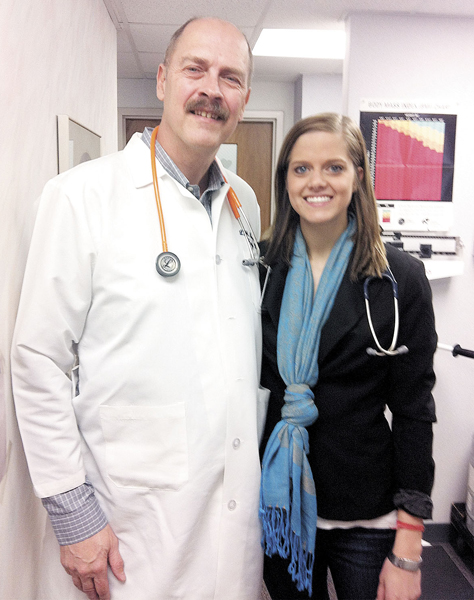 Annie, a physician’s assistant, and Lonnie Berger pose for a photo They traveled to Haiti to volunteer at a medical facility earlier this month. — Submitted photo

This desire was fulfilled from Feb. 6 to Feb. 15 when a 22-person Church of the Nazarene group worked on the construction of a new clinic and assisted at an older medical facility in Haiti.

Annie said she was excited for the trip to Haiti as it would be a father-and-daughter medical trip.

“This will fulfill one of the wishes on our bucket list,” she said before she left. “We’ll travel as a team, one being a doctor (Lonnie) and the other a physician’s assistant (Annie). We’ll work with two nurses and a sonographer from our team along with a Haitian doctor and nurse.”

Some team members from Fergus Falls worked in an older clinic while others painted, roofed and built benches for the new clinic. The new clinic was dedicated on Feb. 12.

Haiti is a Caribbean country that occupies the western, smaller portion of the island of Hispaniola, which it shares with the Dominican Republic. A 7.0 magnitude earthquake struck Haiti on Jan. 12, 2010. The death count was estimated at 220,000. Thousands of people were injured and thousands more were left homeless.

“I’m looking forward to working in the medical clinic with the Haitian physicians,” said Lonnie. “We’re able to bring much-needed medicines along with us from donations we’ve received from the community, family and friends.”

Annie was born in Fergus Falls when her father worked there as a chiropractor. She and her father and mother, Kathy, and four siblings later moved to another community. Her father attended medical school, graduated and moved back to Fergus Falls in 2011 after residing in Tyler, west of Marshall.

Annie graduated from Albert Lea High School in 2006 and Gustavus Adolphus College in 2009 with a degree in health fitness. In December 2011 she obtained a master’s degree in physician assistant studies from the Massachusetts College of Pharmacy and Health Sciences.

She previously spent four months in South Africa on an internship, caring for children infected with HIV.

Annie and her father first learned about the Church of the Nazarene trip to Haiti in June 2011, during a Sunday worship at the church in Fergus Falls.

“My father and I looked at each other, and we each knew this was an opportunity we needed to take as a father and daughter,” said Annie.

The Church of the Nazarene group was part of an organization called Work and Witness. They served in Bleck, Haiti, in the mountain regions near the Dominican Republic border.

Each person on the trip had two suitcases, one for personal belongings and the other for supplies for those in need in Haiti. Hand sanitizers, soap and other supplies were badly needed.