Rebels on the run 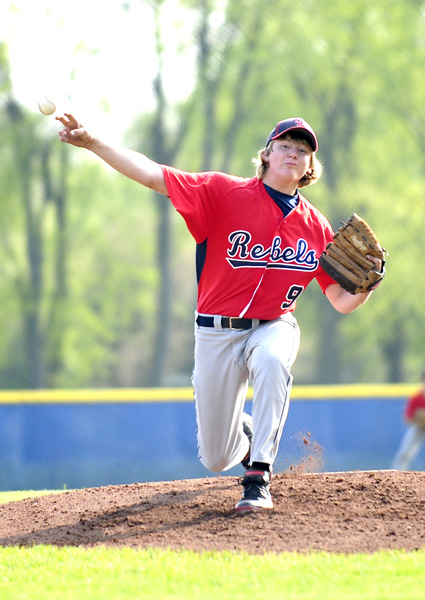 United South Central’s Colin Becher tries to slide into home during the second inning of Monday’s home game. The tag by Medford’s Andrew Kellar was the third out for the Rebels. -- Brandi Hagen/Albert Lea Tribune

WELLS — The United South Central baseball team kicked it into high gear on Monday against Medford when they scored all nine of their runs in the third inning to beat the Tigers 9-3. 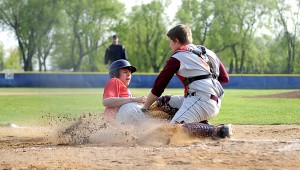 Rebels’ pitcher David Stenzel throws a pitch in the fourth.

“Hitting is contagious,” Rebels coach Pat Frank said. “As soon as one kid started hitting, they all followed suit.”

Three batters for the Rebels scored RBIs in the bottom of the third.

George’s two RBIs were followed by two from Kyle Bauman and two from Redman as he got up to bat for a second time in the inning.

Medford switched out their pitchers after two outs in the bottom of the third, Derek Butterfield in for Zach Johnson, and the Rebels scored just one more run for the night.

Frank was pleased with the way the Rebels played even after they got ahead 9-1.

“When you score nine runs in an inning, it’s easy to sit back and take things for granted,” Frank said. “We didn’t do that, we still played good defense and our pitcher threw strikes.”

The most batters the Rebels let get up to bat was five.

“It was a big conference win for us,” Frank said. “We needed it.”

Frank said he was glad to see the game end how it did after coming off a win over Maple River last Friday.

“I hoped for a nice win to follow that and we did it. The kids responded well,” Frank said.