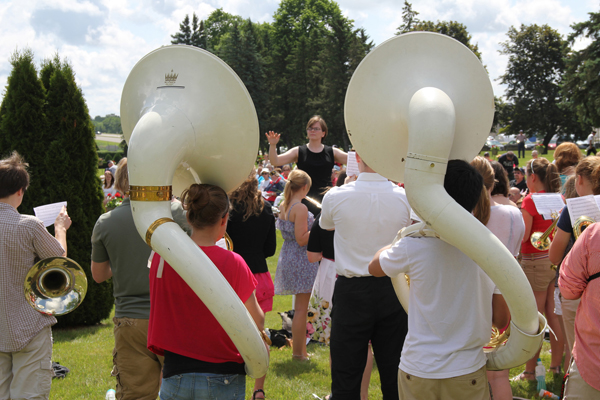 The active military members, veterans and the people who support them must tell the young about the sacrifices made so that the long struggle to end wars can be handed down and eventually succeed.

That was the message of 1st Sgt. Ole Olson at the Memorial Day ceremony at Graceland Cemetery, one of a handful of ceremonies at cemeteries across the Albert Lea area.

He thanked the service of veterans and their supporters, then said: “And finally to those veterans of all wars and conflicts who gave us their all, their last full measure of devotion, I know you will remain in continued vigilance to protect and guide us as we continue to move forward to the future. This day is your special day.” 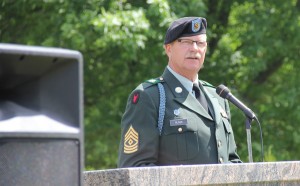 About 400 people gathered at Graceland Cemetery to hear his words and to hear the music of the Albert Lea High School band and the songs of the Careyaires, a men’s chorus with the Albert Lea American Legion Club.

The band played “The Star-Spangled Banner,” “Patriotic Spectacular” and a medley of military songs, one for each branch. Veterans stood during the song for their appropriate branch.

Ole Olson resides on a sesquicentennial farm in Freeborn County with his wife, Aimee, and sons Isaac and Ian. He works throughout Minnesota and South Dakota as a territory salesman for the New Jersey-based GAF Building Materials Corp.

He joined the U.S. Army in February 1973. He was discharged in 1976 before joining the Minnesota Army National Guard in 1977, where he served in Albert Lea until 1996. Since then, he has served with a Twin Cities unit. He has been deployed to Iraq and Afghanistan.

The first sergeant began his comments by reciting President Abraham Lincoln’s “Gettysburg Address.” He said though the speech might have more impact than the memorialization of a final resting place for the dead, he stated that the ultimate reason for the speech was dedication of that battlefield and to memorialize the great sacrifices made there.

“Since then there have been thousands of men and women who have given that last full measure of devotion to uphold what their belief stood for with this great country,” Olson said.

He said on Memorial Day people gather to remember the deeds of the fallen, their heroics and sacrifices, and to note the blessings they have secured.

Olson made comments on wars from World War I to the Iraqi War.

“We as a country have done what we have to, to remain strong and free. Those who have given the last full measure are today being memorialized by we who are the recipients of their actions. It is now we who are still here to carry on the torch of all that we stand for as a great nation.